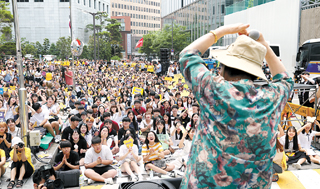 “You’re all so pretty — I love you all!” a 90-year-old woman said with a smile as she spoke to a crowd of teenagers gathered around the bronze statue of a young girl that symbolizes the victims of Japan’s wartime sexual slavery. When Lee Yong-su, one of the victims, came to the podium in front of the former Japanese Embassy in central Seoul, over 1,000 students and others shouted out, “We love you!”
The Wednesday protest commemorated the fifth International Memorial Day for Comfort Women. The title of the event was “Kim Hak-sun, Reborn in 2017, Speaks Up.”

The late Kim was the first person to openly testify, on Aug. 14, 1991, about Japanese military sex slavery during World War II. Since 2013, Aug. 14 has been designated International Memorial Day for Comfort Women, and is observed in many countries.

Many students were in attendance, as Aug. 14 falls during summer vacation. They were holding signs, which read “Official Apology,” “Legal Compensation,” “Dec. 28 Korea-Japan Agreement is Invalid” and “Justice Will Win.” They shouted, “We are born again here as Kim Hak-sun.”

The 91-year-old Kim Bok-dong also joined the rally and told the young students, “We were victimized because the country was powerless. But such a tragedy should never happen to future generations. We will live and unite for the future.”

Co-hosting the event with the Korean Council for the Women Drafted for Military Sexual Slavery by Japan, or Chong Dae Hyup, students of Yale Girls High School delivered handwritten letters to the comfort women victims and sang “A Thousand Winds,” a song dedicated to the victims.

Some students quietly wiped away tears as they sang.

Also in attendance was 60-year-old Akihiro Kawamitsu, a researcher on comfort women in Okinawa. “I attended the Wednesday protest for the first time,” she said. “It is really amazing and moving. I will do my part to expose the truth about wartime sexual slavery by the Japanese military.” Recently in Japan, threatening postcards were delivered to 11 middle schools across the country that chose to use history textbooks that mention comfort women.

As Kim Gun-ja, a victim, passed away on Aug. 23, only 37 surviving victims remain. They are around 90 years old now. The Korean and Japanese governments must not forget the few who remain, our “greatest history teachers,” nor the girls gathered before them.

*The author is a national news reporter at the JoongAng Ilbo.