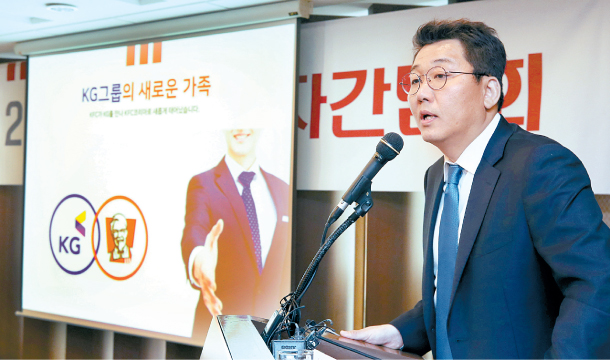 Eom Ik-soo, the new CEO of KFC Korea, speaks at a press conference in downtown Seoul on Friday. [KFC KOREA]

Fast food brand KFC announced Friday it will expand the number of its stores in Korea to 500 by 2023 and hire 1,000 more permanent employees.

Parent company KG Group, which purchased a 100 percent stake in the chicken brand from Luxembourg-based private equity firm CVC Capital Partners in February, wants to grow the brand and improve its image.

Started as a fertilizer company, KG Group is now a leading IT company in Korea’s online payment scene, with its platform for both online and mobile payments ranking No.1 in those two markets.

“From KFC’s perspective, being an affiliate of KG Group instead of a private equity firm means that the company now has the backing and support to devise long-term plans for investments and branding,” said Eom Ik-soo, CEO of KFC Korea, who was newly appointed in June, at a press conference Friday held at Korea Press Foundation’s headquarters in Gwanghwamun, central Seoul.

The main drive of a private equity firm is to boost a purchased company’s value in a short period and resell it, which may encourage decision making that enlarges the business in size in the short term but neglect quality or integrity.

For three years under CVC, KFC Korea’s performance in the competitive local chicken market was sluggish. Last year, the company announced its worst results ever with an annual operating loss of 12.2 billion won.

The red ink continued until June but KFC hopes for a turnaround next year by restructuring its business and relocating branches with low performance to regions with better conditions.

Under KG, KFC Korea expects a more balanced investment between service improvement and expansion. The brand aims to have 500 branches from a current 211 by 2023 and hire an additional 1,000 permanent employees along the way, starting with 200 this year. All of KFC’s branches are directly run by the company, not franchised. That will continue.

“What’s important for us now is enforcing quality control and establishing a stronger brand while growing in size and hiring new employees,” said Eom. “So we decided it’s better to maintain the direct-management system.”

KFC Korea also promised that if the company earns profits of more than 3 percent on sales, it will distribute the rest to employees as incentives or even to consumers through discount events.

Investment in IT technology is another big drive for KFC Korea is pushing since its parent company has expertise in the sector. It upgraded its mobile app last month and is preparing to release another app for remote orders, similar to Starbuck’s Siren Order, in early September. The order-receiving kiosks, currently under a test run at KFC’s Hongdae, western Seoul, branch, will be put in stores nationwide.