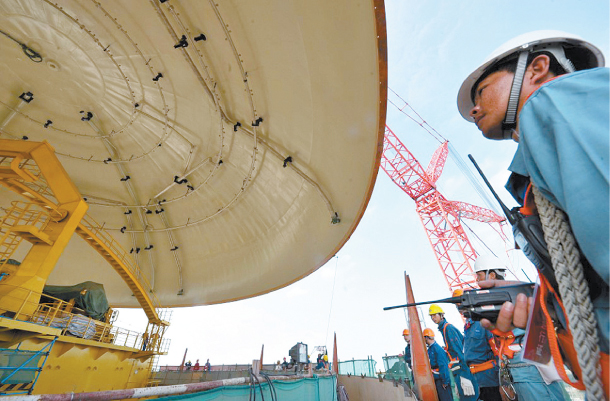 The Chasma Nuclear Power Plant unit 3 that China National Nuclear Corporation (CNNC) built in Pakistan is already in operation and construction of unit 4 is almost done. CNNC is now building another two Hualong 1 plants in Pakistan as well in a contract worth $9.6 billion. 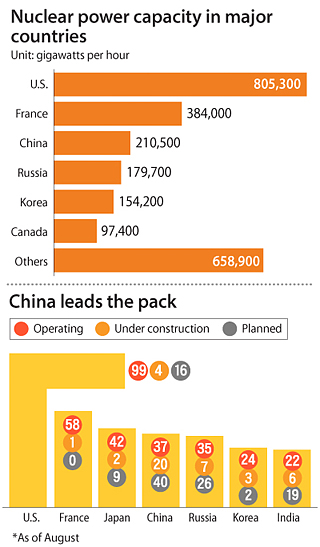 China also won deals from Rumania and Argentina recently and is trying to enter the Middle East and African regions.

Until 2010, China was passive about developing nuclear power technology. Its government built plants with technology from France and Russia and focused on operating them. But starting in 2011, when the world was shocked by the Fukushima Daiichi plant accident, Beijing started focusing on developing its own technologies and succeeded with the Hualong 1 in 2015.

Then China realized it could sell plants to foreign markets, especially in conjunction with its “One Belt, One Road” infrastructure development initiative.

“The size of a nuclear power plant project is huge and the construction period tends to be long,” said Chung Bum-jin, a professor of nuclear engineering at KyungHee University. “Developing countries have no reasons to reject business proposals that offer to build nuclear power plants in very reasonable terms.”

China is constructing lots of nuclear power facilities domestically for cleaner power and to build up technological competitiveness. China has already surpassed Korea in its number of nuclear power plants and capacity generation. The gap between the two countries will widen further. 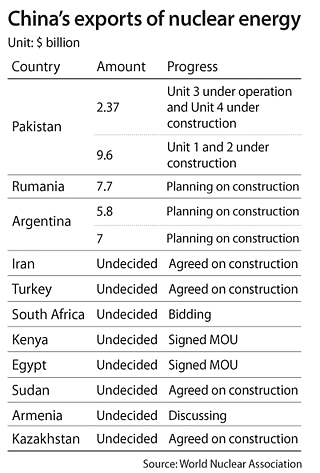 According to the World Nuclear Association (WNA) on Thursday, China currently operates 37 nuclear power plants domestically, is building another 20 plants and planning 40 more. There are 58 nuclear power plants currently under construction in the world and about one third of them are located in China. The Chinese government plans on becoming the world’s biggest nuclear power generator - operating more than 100 plants - by 2030.

Meanwhile, Korea is trying to wean itself off nuclear power completely.

According to the WNA, the global market for nuclear power will reach about $908.8 billion in 2030.

Currently, the United States accounts for 33 percent of the total nuclear power capacity in the world, with France in second place with 16 percent. Russia, which has grown significantly in recent years, is taking similar measures as China. Russia constructs nuclear power plants in other countries by offering loans. Then it operates the plants and sells electricity generated by them.

Foreign Affairs magazine chose Russia as the biggest beneficiary of the bankruptcy of U.S. based Westinghouse Electric in a recent article. Westinghouse was a nuclear power plant colossus in the past. Russia is expanding in countries like Bangladesh, Belarus, China and India, and Western countries are losing ground.

The article projected that Korea’s market size will only shrink due to the Moon Jae-in’s policies to wean the country off nuclear energy.

A Generation III reactor called APR-1400 that Korea developed passed the third part of an evaluation by the U.S. Nuclear Regulatory Commission this year.

France requested that the U.S. NRC suspend indefinitely the design certification review of its reactor, called US Evolutionary Power Reactor (EPR). Japan, which has been under review by U.S. NRC for 10 years now, only passed the first part of an evaluation.

“Korea’s APR-1400 is the first Generation III reactor to finish commercial operation and many of its competitors like France and the United States haven’t been able to test theirs yet,” said an industry insider.

Even though Korea has some of the world’s best technologies for nuclear power plants, it faces complications when it comes to exporting.

The fate of APR+ reactor, which is an upgraded version of the APR-1400, is also unsure at this point due to the government’s anti-nuclear power policy. The APR+, which was developed in 2014, was planned for operation at North Gyeongsang, but the construction has been halted recently.

Other technologies may face similar fates. The government announced earlier this week that it will ask public opinion on whether to continue research on the sodium-cooled fast reactor and pyroprocessing, which reprocess spent nuclear waste.

But the Moon government claims it will continue to support exports of nuclear power related technologies and products.

“Who would buy our products when we say we are not building them since we worry about their safety?” asked Seo Kyun-ryul, a nuclear engineering professor at Seoul National University. “The Chinese Hualong 1 is very similar to Korea’s APR-1400. It’s not much different from the Chinese smartphones that are basically imitations of Galaxy S phones. We recently got a chance to lead the market using the third generation nuclear reactor that we have developed for more than 60 years, but now we are about to lose our competitiveness.”

“Not only China and Russia but also countries like the United States and Taiwan are trying to attract Korean nuclear technicians,” he said. “If the government decides to shut down construction of the Shin Kori 5 and 6 reactors, Korea will pay a big price.”