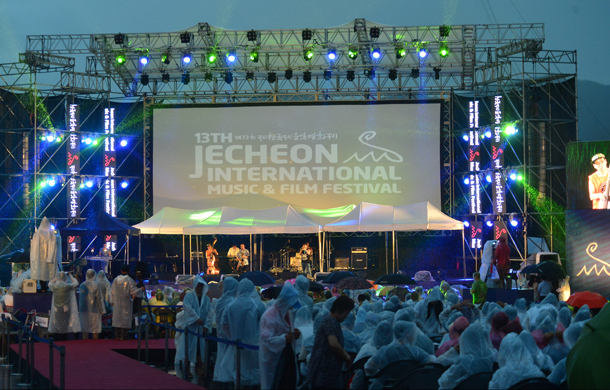 Korea’s largest annual international festival of music films opened in the central city of Jecheon on Thursday featuring 107 titles from 34 countries, the largest number in the festival’s history.

“Django,” a drama about the life of legendary jazz guitarist and composer Django Reinhardt, is the festival’s opener. The directorial debut by French filmmaker Etienne Comar premiered at this year’s Berlin International Film Festival.

Seven films were nominated for the festival’s only international competition section, “World Music Film Today,” which introduces the latest films across all genres where music plays a central role. The seven include “The Golden Wing,” a biopic on India’s legendary folk singer Padmashree Pratima Barua Pandey, and “Hotel Rock’n’Roll,” an Austrian drama about an aspiring rock‘n’roll star who struggles to save a run-down hotel inherited from her uncle.

A jury of five international members will select the winner of the Lotte Award, which is accompanied by $20,000 in prizes. The winning film will close the festival on Tuesday.

This year’s festival expanded the scope of its annual award for film music composers who left significant marks in film music from Asia.

The first winner chosen was Kenji Kawai, a Japanese music composer who has contributed to the musical scores for numerous films such as “Ring,” “Death Note” and “Battle of Wits.”

The JIMFF also has a two-part outdoor nighttime music program where visitors can enjoy live music in addition to the music onscreen from Friday to Monday.