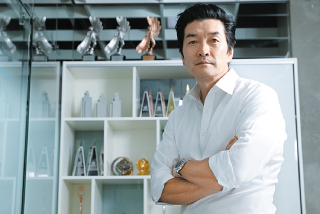 Wain Choi, a senior vice president and chief creative officer at Cheil Worldwide, who will serve as a judge at this year’s AdStars Festival in Busan, says he will focus on creativity and how well advertisements were planned when evaluating. [CHANG JIN-YOUNG]

For the first time in history, an ethnic Korean was chosen as a judge for the annual advertisement award ceremony AdStars Festival in Busan - Wain Choi, a Korean-Canadian and a senior vice president and chief creative officer at Cheil Worldwide.

Choi will evaluate about 3,000 advertisements that industry insiders have produced and submitted for the competition. When he met with the JoongAng Ilbo recently, Choi introduced how he will be participating in the award ceremony and shared how he became interested in advertisement. This year marks the 10th anniversary of the festival.

“There were more entries using the latest technologies such as virtual reality, artificial intelligence and augmented reality this year,” Choi said. “Many global IT companies like Facebook and Baidu have submitted their advertisements, as well. I believe the creativity and how participants planned the products will be key criteria this year.”

Choi said a good advertisement is something that moves people’s hearts and he gave an example of an ad for sportswear worn by Michael Phelps. The ad was released right before Phelps participated in the Rio Olympics, after he had gone through various hardships.

Choi explained that the ad showed Phelps training in a swimming pool and that it explained how he maintained the world’s top position. He added that the advertisement won a lot of attention in the United States and that it might even have helped Phelps perform well at the Olympics, though he didn’t explain exactly how that would be possible.

Choi added that he heard about the son of Korean singer Kim Tae-won, who had autism and had difficulty communicating with his parents as a result. This is how he began an ad campaign for children with autism for Samsung Electronics’ mobile app called “Look At Me,” which helps such children. Tens of thousands of people have downloaded the app and Choi received 40 prizes from well-known advertisement award ceremonies like Cannes Lions.

Choi was born in Seoul and flew to Canada with his parents when he was nine. He said he was confused about his identity after his nationality changed.

“I wasn’t sure whom to cheer for when watching sports games between Korea and Canada,” he said. Choi majored in fine arts, and said he wasn’t sure what he would do after graduation. He said he was like a “starving artist” back then and that he worked at factories and bakeries.

“I received more than $10 an hour at the factory and I think it was not that bad considering the low consumer prices in the 1980s,” Choi said. “The reason why I entered an institution to learn about advertisement was because of my wife, then girlfriend, who suggested I do it. I still remember shouting ‘I am quitting!’ when leaving the factory after I got the acceptance letter. My life as an ad man began at that point.”

Choi also gave advice anyone who hopes to follow in his steps.

“If someone really wants to become an ad man,” he said, “he or she needs to learn to look at things from other people’s perspectives.”