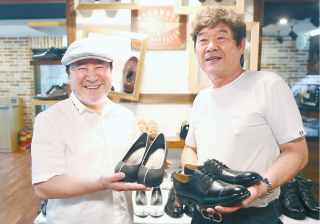 “Shoes transform your body language and attitude,” Christian Louboutin, the French fashion designer known for his signature red-soled stilettos, once observed. “They lift you physically and emotionally.”

So it was in May that Yoo Hong-sik and Jeon Tae-su, two master shoemakers based in Seongsu-dong, western Seoul, made a secret “business trip” to the Blue House to transform the president and first lady.

“I have been making shoes for 50 years,” says Jeon, “but this was such an exciting experience I couldn’t even sleep.”

It began when a man walked into Yoo’s shop one day. Yoo is a renowned shoemaker and was selected as Seoul’s No. 1 master craftsman in 2013. Yoo recalls, “He asked if I could go on a business trip, so I said no, and after hesitating he explained he was from the Blue House and asked me to make shoes for the president.”

In Jeon’s case, two young women visited saying they wanted to buy a present for their mother. They tried on a number of shoes and took photos. Three days later, an official from the Blue House visited to ask Jeon make shoes for Kim.

Seongsu-dong is filled with shoe shops, but among them, Yoo and Jeon are known as “shoe presidents.” Yoo was born in Gwangju, South Jeolla, and left home to live in Seoul when he was in the sixth grade. In Myeongdong, central Seoul, he worked at a shoe factory for a year before returning home to persuade his father of his vision.

To make a single pair of shoes, Yoo hammers them hundreds of times over a period of about 10 days. He still uses the same hammer he used when he was in the sixth grade. The hammer was a gift from Cheon Gui-nam, his mentor, 55 years ago. It is his most valued possession.

Jeon, meanwhile, inherited his skill from his father, a blacksmith. Jeon graduated from elementary school in Hongcheon, Gangwon, and came to Seoul to work at a shoe factory. To learn shoemaking skills quickly, he slept and ate at the factory. “I studied the designs of both hand-made and mass-produced shoes by disassembling them,” Jeon says.

Interestingly, both men did well, but expanded too quickly in the 1990s, went bankrupt and started again. But today, their businesses are stable and their dedication is as firm as ever.

“I make shoes as if I will be wearing each pair,” Yoo says.

And that dedication has paid off. Yoo and Jeon recently saw Moon and the first lady on television, leaving for an economic mission to the United States and Germany wearing the shoes they both made for them.

“I was surprised Moon was wearing old shoes with cheap socks,” Yoo says, recalling the day they met. “The president didn’t seem like he had a particular preference of style, but asked for a pair of patent leather shoes.”

The two of them measured the feet of President Moon Jae-in and the first lady, Kim Jung-sook. Yoo handcrafted six pairs of shoes for Moon using Italian leather. Jeon designed shoes for Kim with a design resembling the toe of a traditional Korean padded sock.

While measuring her feet, the first lady showed Kim a callus and told him, “This is from all the walking during the election campaign. Please make shoes that don’t hurt my foot.”

According to the two of them, it took about 15 days to complete the order and only then they were able to sleep well at night.