Chung Hyeon is one step closer to making history in Korean men’s tennis. 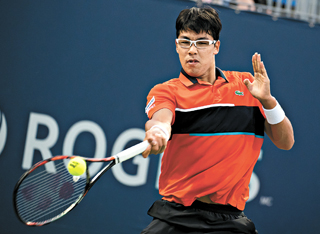 Chung Hyeon hits a backhand against Adrian Mannarino of France during the round of 16 at the Rogers Cup in Canada on Friday. [XINHUA/YONHAP]

The 21-year-old was eliminated in the Rogers Cup’s round of 16 in Canada on Friday, but he earned enough points to possibly propel him into the 40s in world ranking.

If he succeeds, it will put him within striking distance of the previous Korean record holder, Lee Hyung-taik, who ranked 36th in August 2007.

Chung, currently the 56th best player in the world, concluded his run in the Rogers Cup, also known as the Canadian Open, with a 2-0 set loss against Adrian Mannarino of France. Chung played well, but it wasn’t enough to overcome Manarino, who had advanced to the round of 16 after defeating No. 6 Milos Raonic of Canada in the round of 32.

The Rogers Cup is part of the Masters 1000 series, the third-highest tier on the Association of Tennis Professionals tour. The Canadian event is considered one of the biggest non-major tournaments in men’s tennis.

Although Chung failed to advance to the finals, he still earned $58,295 and received 90 points, giving him the possibility of ranking in the 40s for the first time in his career. His personal best was 51st in October 2015. No Korean tennis player has surpassed Lee’s 36th.

Chung overall has had an impressive season this year, winning against a number of highly ranked players. Most notably, he defeated Gael Monfils of France, ranked 16th at the time, at the Bavarian International Tennis Championships in May. After the match, Monfils told the French media that Chung was “simply too good” for him that day.

And earlier in April at the Barcelona Open, he defeated Alexander Zverev Jr. of Germany, ranked 20th, for a chance to face the formidable Rafael Nadal of Spain in the quarterfinals. He lost the match against Nadal, but it demonstrated his potential. At the Rogers Cup, Chung topped No. 13 David Goffin of Germany in the round of 32 and left a strong impression in the tennis world, with many media outlets calling him the one to watch.

Chung’s season hasn’t been without blips. Prior to the Rogers Cup, he had to take two months off from competing due to an injury in his left ankle. It cost him a spot at Wimbledon, but the rehabilitation process helped him adjust again to the hard court.

“It took him a while to return from the injury,” said Suk Hyun-jun, Chung’s coach, “but he seems to have fully recovered based on what I’ve seen through the Rogers Cup.”

Chung is next heading to the Cincinnati Masters, where he’ll face Feliciano Lopez of Spain on Tuesday. Afterward, he’ll compete in the U.S. Open, the last major of the season, starting on Aug. 28.