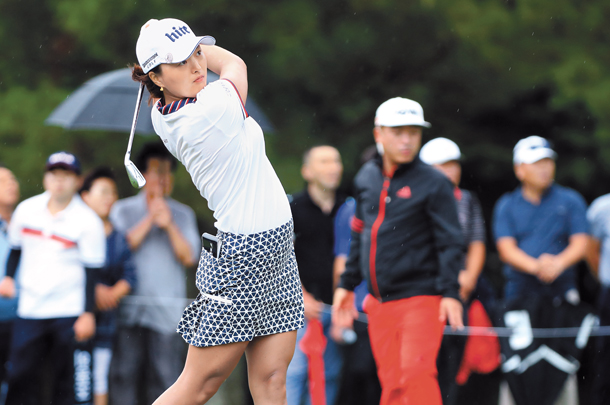 Ko Jin-young watches her shot during the final round of the Jeju Samdasoo Masters at the Ora Country Club in Jeju on Sunday. Ko shot a bogey-free round of 66 on the last day to win four shots ahead of Kim Hae-rym, the runner-up. [KLPGA/YONHAP]

Ko Jin-young captured her first victory of the season at the Jeju Samdasoo Masters at the Ora Country Club in Jeju on Sunday.

Keeping her stride from the second round of the tournament, Ko began her final round with a birdie and kept a bogey-free score card. With a birdie on the par-four ninth, Ko held a one-shot lead, and with three additional birdies through the par-five 15th, Ko quickly extended her lead to three shots.

Although Choi Yoo-lim came as close as two shots behind Ko, she fell apart during the last two holes, making back-to-back bogeys while Ko finished with a birdie and a par. Just like her second round, Ko excelled in the back nine and made four birdies.

With another round of 66, Ko won four shots ahead of the runner-up, Kim Hae-rym. Aside from Ko’s bogey-free round on the final day, her second round was notable as she tied the KLPGA Tour’s record for most consecutive birdies, eight, which Cho Yoon-ji set at the E1 Charity Open in May 2015.

Ko’s victory this weekend marks her eighth career victory. When Ko made her KLPGA Tour debut in 2014, she quickly became a star after her victory at the 2015 Nefs Masterpiece. In the 2015 season, Ko continued her success with three more victories, quickly becoming one of the KLPGA Tour’s top athletes.

Once Park announced her decision to join the LPGA Tour, many expected Ko to dominate the KLPGA this season. Instead, Ko has struggled to keep her momentum from last year, only managing to record six top-10 finishes in 11 tournaments up until this weekend. In July, Ko played at the U.S. Women’s Open, an LPGA Tour event, and managed to finished tied for 15th.

While Kim Ji-hyun, Lee Jeong-eun and Kim Hae-rym have each captured multiple victories this season, Ko continuously came up short of a victory, dropping to as low as 20th in the seasonal prize money ranking. But with a winning purse of 120 million won ($105,000), Ko has moved up to 11th and is now ranked fifth in the KLPGA Player of the Year rankings.

Despite expectations that she would win her first KLPGA Tour event of the season, Park In-bee finished tied for 56th with a final-round score of 77, including a double bogey and four bogeys. After this weekend, Park has played in a total of 18 KLPGA tournaments since she started her career on the LPGA Tour in 2007, but she is yet to claim a victory on the domestic tour. Park’s best finish in a KLPGA tournament remains second place, which she has done a total of six times.

Park will return to the KLPGA Tour in October for the KB Financial Group STAR Championship, which will be her last attempt at capturing her first KLPGA Tour title this season.

Oh Ji-hyun, who started the final round with a one-shot lead, finished tied for 15th with a four over par in the final round and Lee tied for third with Lee Seung-hyun at 12 under par. And as Kim managed another runner-up finish, she recorded her 10th top-10 finish of the season.

Starting on Thursday, the KLPGA will continue its season, hosting the BOGNER MBN Ladies Open at the Star Hue Country Club in Yangpyeong, Gyeonggi.