Korean curlers said Friday that they would try to grab multiple medals at next year’s Winter Olympics being hosted at home. 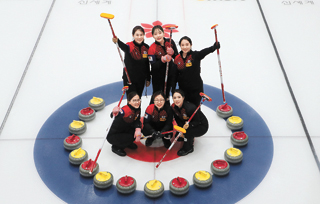 Korea will send teams to the men’s, women’s and mixed doubles events at the PyeongChang Winter Games in February. At the national team media day at the Uiseong Curling Center in Uiseong County, North Gyeongsang, some 330 kilometers (200 miles) southeast of Seoul, the curlers said their goal was to win a medal in each of the three events.

Korea finished out of medals in the women’s event at the 2014 Sochi Winter Olympics, while the men’s team didn’t qualify.

Mixed doubles will be contested for the first time in PyeongChang, and Lee Ki-jeong, the male member of the team alongside Jang Hye-ji, said he’s hoping to feed off the energy of partisan crowds.

“When we compete overseas, we have to deal with noise of the local fans, as they ring bells or blow whistles,” Lee said. “I hope fans will show up in droves in PyeongChang and cheer us on.”

Korean curlers are a tight bunch. They were mostly born and raised in Uiseong, and more than a few are actually related.

Lee Ki-jeong is a twin brother of the men’s team member, Lee Ki-bok. Another male curler, Kim Min-chan, is a younger brother of Kim Min-jung.

Jang Ban-seok, who coached the men’s team when Korea failed to qualify for the 2014 Sochi Winter Games, said he’ll seek a chance at redemption with the mixed doubles team.

“We shed a lot of tears when we missed out on Sochi,” he said. “In PyeongChang, we want to show our people just how far we’ve come.”

With curling among the less glamorous and popular winter sports, athletes and coaches alike said they would appreciate more support from their national federation.

In particular, the curlers said they would like to have a competition at the Gangneung Curling Centre, the Olympic venue next year, so they could have a better feel before the PyeongChang Games.

Getting a chance to compete and even train at the Olympic venues is one advantage for athletes of host nations, but it’s not something Korean curlers will get to enjoy. The Gangneung Curling Centre is undergoing repairs after its concrete floors showed cracks following the world junior championships in March. Only Lee Ki-jeong and Lee Ki-bok, who competed at the junior event, have actually performed at the Gangneung Curling Centre.

“We’d like a chance to get used to the sound of the crowd [at the Gangneung Curling Centre] before the Olympics,” said Kim Min-jung, the women’s coach. “But as it stands, we may actually be at a disadvantage. Curling is a very sensitive sport, and small things can make a huge difference.”

The national teams have had events in Uiseong and Seoul but no spectators. Kim Min-jung asked for an international event to be held before PyeongChang so that her athletes could get a sense of what the Olympics will be like.

Before the media day, Prime Minister Lee Nak-yon visited the curlers in a show of support and pledged the government’s support.