Ryu’s streak comes to an end against San Diego

Ryu’s streak comes to an end against San Diego

After two consecutive starts without allowing a run, Ryu Hyun-jin of the Los Angeles Dodgers’ streak came to an end against the San Diego Padres at Dodgers Stadium on Saturday. Despite Ryu’s performance, the Dodgers still managed to pull out a 6-3 win. 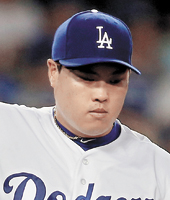 In five innings, Ryu gave up seven hits, including a home run, two walks and three runs. Compared to Ryu’s pitching in the two previous games, in which he managed to throw seven scoreless innings, his performance against the Padres failed to meet expectations. The three runs scored with Ryu on the mound moved the pitcher’s ERA up from 3.53 to 3.63.

Ryu’s run of 17 scoreless innings, which began against the Minnesota Twins on July 25, ended in the top of the third, after both Jose Pirela and Hunter Renfroe hit doubles off the pitcher.

Ryu struggled to connect with catcher Yasmani Grandal throughout the game. The two made numerous attempts to strike out right-handed batters with outside changeups, but Ryu was unable to bring his pitch inside of the strike zone.

In the top of the fifth, Padres first baseman Wil Myers hit a homer off of Ryu, the first the pitcher has given up since returning from his hip injury. In the fifth inning, after 108 pitches, Ryu was called off the mound and replaced by left-hander Tony Watson. When Ryu left the mound, the Dodgers were losing 3-1, but the batters made up for the deficit and Los Angeles pulled off a come-from-behind victory. With the win, Ryu was able to avoid picking up his seventh loss of the season.

After Yu Darvish was traded to the Dodgers from the Texas Rangers at the end of July, the Dodgers’ pitching rotation has one too many pitchers. Every time Ryu takes the mound, he risks having a bad game that can knock him off the rotation. Currently, Ryu is competing for the fifth spot on the Dodgers’ pitching lineup for the remainder of the season and into the postseason against Kenta Maeda and Brandon McCarthy.