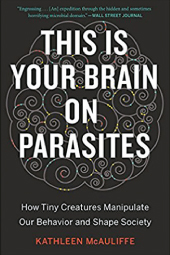 This Is Your Brain on Parasites: How Tiny Creatures Manipulate Our Behavior and Shape Society

Parasites can live only inside another animal and, as Kathleen McAuliffe reveals, these tiny organisms have many evolutionary motives for manipulating the behavior of their hosts. With astonishing precision, parasites can coax rats to approach cats, spiders to transform the patterns of their webs, and fish to draw the attention of birds that then swoop down to feast on them. We humans are hardly immune to their influence. Organisms we pick up from our own pets are strongly suspected of changing our personality traits and contributing to recklessness and impulsivity-even suicide. Germs that cause colds and the flu may alter our behavior even before symptoms become apparent.

Parasites influence our species on the cultural level, too. Drawing on a huge body of research, McAuliffe argues that our dread of contamination is an evolved defense against parasites. The horror and revulsion we are programmed to feel when we come in contact with people who appear diseased or dirty helped pave the way for civilization, but may also be the basis for major divisions in societies that persist to this day. This Is Your Brain on Parasites is both a journey into cutting-edge science and a revelatory examination of what it means to be human.

“If you’ve ever doubted the power of microbes to shape society and offer us a grander view of life, read on and find yourself duly impressed.” -Heather Havrilesky, Bookforum 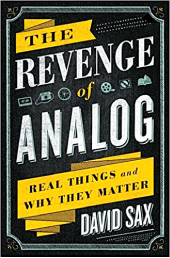 The Revenge of Analog: Real Things and Why They Matter

A funny thing happened on the way to the digital utopia. We’ve begun to fall back in love with the very analog goods and ideas the tech gurus insisted that we no longer needed. Businesses that once looked outdated, from film photography to brick-and-mortar retail, are now springing with new life. Notebooks, records, and stationery have become cool again. Behold the Revenge of Analog.

David Sax has uncovered story after story of entrepreneurs, small business owners, and even big corporations who’ve found a market selling not apps or virtual solutions but real, tangible things. As e-books are supposedly remaking reading, independent bookstores have sprouted up across the country. As music allegedly migrates to the cloud, vinyl record sales have grown more than ten times over the past decade. Even the offices of tech giants like Google and Facebook increasingly rely on pen and paper to drive their brightest ideas.

Sax’s work reveals a deep truth about how humans shop, interact, and even think. Blending psychology and observant wit with first-rate reportage, Sax shows the limited appeal of the purely digital life-and the robust future of the real world outside it. 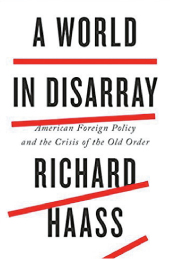 A World in Disarray: American Foreign Policy and the Crisis of the Old Order

An examination of a world increasingly defined by disorder and a United States unable to shape the world in its image, from the president of the Council on Foreign Relations

Things fall apart; the center cannot hold. The rules, policies, and institutions that have guided the world since World War II have largely run their course. Respect for sovereignty alone cannot uphold order in an age defined by global challenges from terrorism and the spread of nuclear weapons to climate change. Meanwhile, great power rivalry is returning. Weak states pose problems just as confounding as strong ones. The United States remains the world’s strongest country, but American foreign policy has at times made matters worse, both by what the U.S. has done and by what it has failed to do. The Middle East is in chaos, Asia is threatened by China’s rise and a reckless North Korea, and Europe, for decades the world’s most stable region, is now anything but. As Richard Haass explains, the election of Donald Trump and the unexpected vote for “Brexit” signals that many in modern democracies reject aspects of globalization, including borders open to trade and immigrants.

A World in Disarray is a wise examination, one rich in history, of the current world, along with how we got here and what needs doing. Haass shows that the world cannot have stability or prosperity without the United States, but that the United States cannot be a force for global stability and prosperity without its politicians and citizens reaching a new understanding.