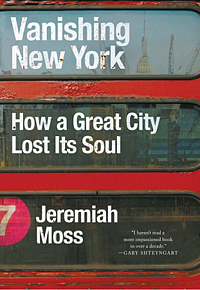 Vanishing New York: How a Great City Lost Its Soul

If you’ve lived in New York City for any period of time, you’ve likely seen the place change.

People move in and out of the city, as if walking through a revolving door. Similarly, restaurants open to fanfare only to die a short time later.

But in the last decade or so, the most striking change happening in Manhattan is the “hyper-gentrification” across formerly unique neighborhoods, creating a gleaming sky-high suburb for the 1 percent. “It’s cupcakes, cronuts and hundred-dollar doughnuts dipped in 24-karat gold (yes, this exists - in Williamsburg),” writes author Jeremiah Moss in his new book, “Vanishing New York: How a Great City Lost its Soul.”

The book is an expansion of his popular blog of the same name, where Moss has long chronicled the demise of beloved, if gritty, New York establishments. The book is an indictment of local leaders who ushered in a sterilized iteration of Gotham.

One example of Manhattan’s suburbanization: the number of Starbucks outposts. The coffee giant has 307 locations on the island alone, one for every 5.5 blocks.

In fact, walk down the streets of Greenwich Village or through Times Square and you’ll see the same national retailers that occupy shopping malls all over the country: Olive Garden, Applebee’s and Outback Steak House; J. Crew, the Gap and American Eagle Outfitters.

“The city is becoming a dull landscape of Anywhere, USA, in which New York looks less like New York and more like downtown Denver, Dallas, Toledo,” Moss writes. “Same towers, same coffee chains, same mega-mall typefaces and cinnamon-bun compulsions, buildings made of shiny surfaces that face each other admiring themselves in their neighbors’ empty reflections.”

New Yorkers may find the book is a sad elegy to a city that is no longer recognizable.