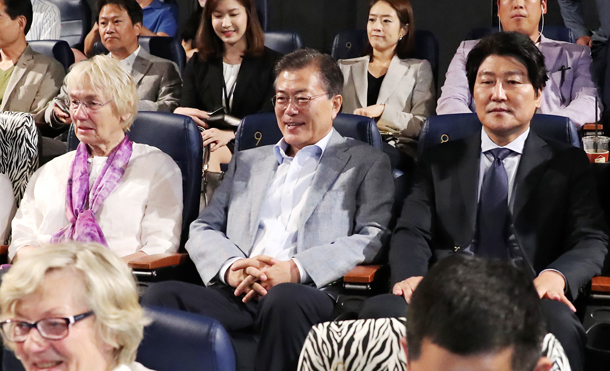 President Moon Jae-in on Sunday watched “A Taxi Driver,” a movie about the 1980 pro-democracy uprising in Gwangju at a movie theater in Seoul.

The movie released this month is based on the true story of a Korean taxi driver and Jurgen Hinzpeter, a German journalist who covered the armed revolt.

In May 1980, citizens of the southern city rose up against a military junta led by Chun Doo-hwan, an Army general, who assumed power via a coup after his predecessor President Park Chung Hee was assassinated.

“The movie shows how a foreign reporter’s efforts contributed to Korea’s democratization,” a presidential official said. “[The president] saw the film to honor Hinzpeter in respect for what he did for the country.”

Hinzpeter, who passed away in May last year, is one of a few foreign journalists who exposed the military’s bloody quelling of citizens. Part of his body has been enshrined in a special cemetery dedicated to the victims in Gwangju.