KT shows off 5G gadgets at the beach

KT shows off 5G gadgets at the beach 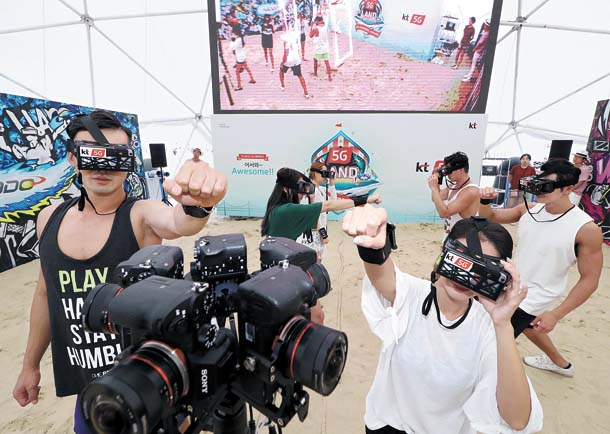 Visitors of KT’s “5G Land” play a “Street Fighter”-style game through virtual reality headsets at Haeundae Beach in Busan over the weekend. The telecom company set up zones on the beach to let vacationers try technology associated with its 5G network. [KT]

BUSAN - They call it “5G Land.” Inside a white tent pitched on the sands of this seaside city’s famed Haeundae Beach, vacationers in town for the weekend busied themselves with a panoply of technological gadgets, from virtual reality games to drones.

From Friday to Sunday, local telecom company KT had set up a tent on the nation’s most famous beach to show off a wide range of services and devices that can work with its upcoming 5G network. The network promises faster cellular service and quicker download times, allowing the use of more data-consuming apps like virtual reality games and drone software.

“We expect about 100,000 vacationers will be able to experience 5G through our service zone that runs from Friday to Sunday,” Lee Pill-jai, executive vice president of KT’s marketing strategy, said Friday during the opening. “With a faster 5G network, consumers will be able to enjoy a lot more sophisticated data-consuming games and entertainment, and our 5G Land shows a glimpse of a possible future.”

One section of the tent that was particularly popular with visitors was the sports experience zone, where there were people waiting to try on virtual reality headsets that gave the illusion of a virtual battle akin to “Street Fighter.” Players stood inside a square box, and whenever they moved their arms out in a punching motion, the headset displayed a fireball discharging from their wrist and hitting opponents on the other side.

The three-on-three game, called “HADO,” was developed by Meleap, a company based in Japan. KT brought the game to Korea for the first time to demonstrate how 5G’s speed can enhance gameplay and graphics. Lee said the network, once it’s commercialized, will allow developers to create more complicated and challenging games for consumers.

Another popular area was the drone section. There, KT showed off vehicles equipped with thermal imaging cameras and sensors that can monitor air quality. The hope is that a 5G network, with its larger data capacity, will allow drone operators to receive captured data from cameras and sensors in real time.

The tent’s network was powered by a portable base station, really a 3.5-ton truck parked near the tent and loaded with network equipment that was communicating with KT’s core 5G servers at the company’s research and development hub in Seoul.

KT plans to set up more makeshift 5G Lands at festivals across the country later this year. The next one will be on Jaraseom Island in Gyeonggi, where KT is hosting a music festival in September. A slew of universities will have 5G Lands at their fall festivals throughout September and October, and in November, the company will pitch the tent on the plaza outside Seoul’s City Hall and hold a drone race there.

The campaign is part of the lead-up to next year’s PyeongChang Winter Olympics, where KT is building a 5G network to power the site and offer data-heavy services like real-time broadcasts using 360-degree cameras. A spokesperson from the company said the 5G Lands were the only way to make the network tangible to customers and help them realize the technology’s full potential ahead of the Games.

In February, KT’s chief executive officer, Hwang Chang-gyu, announced the company’s goal to commercialize its 5G network by 2019, faster than any other country.

Competitors in other countries like China, Japan and the United States had set 2020 as the starting line for commercializing 5G.

Samsung Electronics is preparing to launch a smartphone that can work on 5G by February 2018, in time for the Winter Olympics.