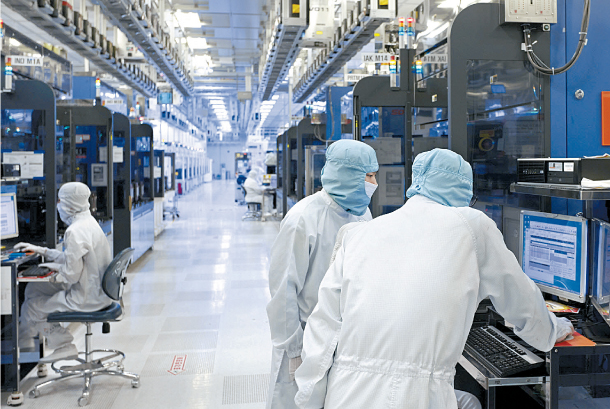 The semiconductor manufacturers, which have been enjoying their best year, are busy searching for workers so they can expand.

“The workload has been piling up to the point where we’re struggling to meet orders,” said a Samsung Electronics official. “And as we’re also increasing our lineup, we’re very short on workers with expertise.”

The employees the company is looking for vary from those with doctorate degrees to those with only a bachelor’s degree but have more than eight years of experience in related fields. The company will be announcing hires by the end of this month.

In the first half of this year, Samsung hired 300 graduates of vocational high schools.

In the past, the company hired students for its production posts, but since August of last year, a revised bill bans students from working overtime or on holidays, and the semiconductor production plant has to run 24 hours without stopping.

As a result, teachers at vocational high schools were calling up old students to tell them that Samsung is hiring.

Earlier this month, SK Hynix started hiring experienced workers for its SSD department, seeking candidates with a bachelor’s degree in electronics or computer software and eight years of experience for its quality-evaluation posts.

Both companies have seen better-than-expected performance, largely thanks to increasing demand in the global market, a result of the development of technologies such as virtual reality, the Internet of Things and big data services.

SK Hynix also saw its operating profit reach an all-time record at 3.6 trillion won, a 573.7 percent year-on-year increase. But more noticeable was the fact that its operating profit-to-sales ratio was 45.6 percent, higher than other global competitors.

“A shortage of memory is creating a boom in the overall semiconductor market,” said Andrew Norwood, Gartner’s research vice president. “Memory vendors have been able to increase their price for DRAM and NAND, driving revenue and margins higher.”

Norwood added that Samsung Electronics will likely stand to gain the most, as the world’s largest memory supplier.

Even in the NAND chip business, Samsung takes up more than one-third of the global market share. SK Hynix, which only has a 10 percent market share in NAND chips, is hoping to expand its influence by buying Toshiba, which is second to Samsung with 19.6 percent.

The market is already projecting that Samsung and SK Hynix will likely post a similar or even better performance in the third quarter.

“[Samsung’s] semiconductor business is likely to reach a new record in operating profit at 9.4 trillion won [in the third quarter],” said Euh Kyu-jin, an analyst at eBest Investment Securities.

Semiconductor production jobs are usually divided into three categories: production, engineering and research. In the past, production employees personally handled the wafers themselves, but these days, production has become automated.

But researchers, who design the semiconductors, are in short supply.

While both Samsung and SK Hynix prefer researchers who can jump right in, such quality employees are hard to come by.

“Semiconductors are a hard business and because of that, there aren’t many college students who specialize in this field,” said Lee Seung-baek, Samsung Electronics semiconductor managing director. “It’s not easy to find talent overseas, either, because Korea’s technology excels in this field.”

The shortage of workers is likely to continue for the time being.