Apartments in the Signiel Residence can be used as home offices and cost up to 37 billion won (32 million dollar). [SIGNIEL RESIDENCE]

It’s often said that luxury items are one of the few things unaffected by a slow economy. That’s because those who can afford extravagance will continue to spend money on it.

But there are always exceptions, and this time around, it’s the super-expensive homes around Hannam-dong in central Seoul and Jamsil-dong in southern Seoul. 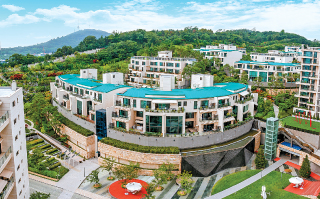 Hannam The Hill in Hannam-dong, central Seoul, where an apartment can go for up to 8.1 billion won (7.1 million dollar). [JOONGANG PHOTO]

The apartments at Hannam The Hill in Hannam and the Signiel Residence in Jamsil are famously pricey and located in two of the most coveted neighborhoods in the country. But because of their sky-high prices, most of the rooms are vacant.

According to a registry office at the Supreme Court, only 24 percent of apartments bigger than 240 square meters (2,600 square feet) at Hannam The Hill have been sold so far. A single apartment can cost 5.5 billion to 8.1 billion won ($4.8 million to $7.1 million).

The situation is worse at the Signiel Residence, a set of luxury apartments located on the 42nd to 71st floors of the Lotte World Tower. Only seven out of 223 apartments have been sold.

Each unit is between 133 to 829 square meters. Construction finished early this year and presales began in April. Apartment prices range from 4.2 billion won to 37 billion won. 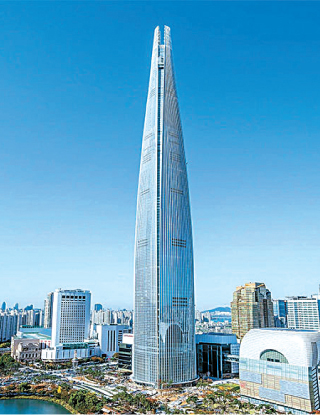 The Lotte World Tower in Jamsil, southern Seoul, where the Signiel Residence is located between the 42nd and 71st floors of the 123-story skyscraper. [JOONGANG PHOTO]

The seven apartments sold are located between the 44th and 65th floor and fall between 133 and 244 square meters. The price paid is said to have been between 4.3 billion and 8.9 billion won.

While Korea’s real estate market is facing an unprecedented boom these days, sales of luxury apartments are unexpectedly slow even when taking into consideration the fact that prices are set way above market average. According to a report issued by the Korea Housing and Urban Guarantee Corporation, the rate of presale in the first three to six months was 88.2 percent nationwide.

Market observers believe an excessive supply is one of the main factors behind slow presales of luxury homes. “The two areas [Hannam and Jamsil] have been seen an excessive amount of homes being built in a similar time period,” said Park Won-gab, a senior adviser for real estate at KB Kookmin Bank.

There are about 300 apartments priced above 5 billion won at Hannam The Hill and the Signiel Residence but not enough buyers who can afford them.

Aside from Hannam and Signiel, the last homes sold above 5 billion won in Seoul were two apartments at the Hanwha Galleria Foret, a luxury residence near Ttukseom Station in eastern Seoul. Both houses were sold in 2008.

In Busan, two apartments at LCT The Sharp in the beachside district of Haeundae were sold last year for 6.8 billion won each.

The general assumption is that a person must have assets of more than 100 billion won to be able to purchase such an expensive home, but there aren’t many in Korea who fall under this category.

According to a report from KB Kookmin Bank of the country’s wealthiest people, only 800 people had assets totaling more than 200 billion won in 2015. Even if that number has since increased, analysts estimate it would still be less than 1,000.

And according to the most recent data from the National Tax Service, there were only 3,400 people in Seoul and 6,300 nationwide who pay more than 1 billion won in income taxes. Based on this data, the number of people with assets of more than 100 billion won is less than 10,000.

Taking into account the fact that these individuals’ neighborhood preferences could vary, potential demand for the 300 homes in Hannam The Hill and the Signiel becomes even lower.

Although their sales are slow now, market observers don’t think the drought will last for long since the quality of the homes is undoubtedly top-notch.

The Signiel Residence recently shifted its target client from families to companies. Its strategy is to sell the apartments to companies that have frequent visitors from overseas and need a guest residence. It is strongly marketing its hotel-like services including housecleaning, room service and access to a swimming pool and luxurious fitness center.

“There are people making inquiries from both Korea and China,” said a source at the real estate agency handling homes in the Signiel. “Their inquiries have not turned into actual purchases, but the number of inquiries about the residence is constantly rising.”