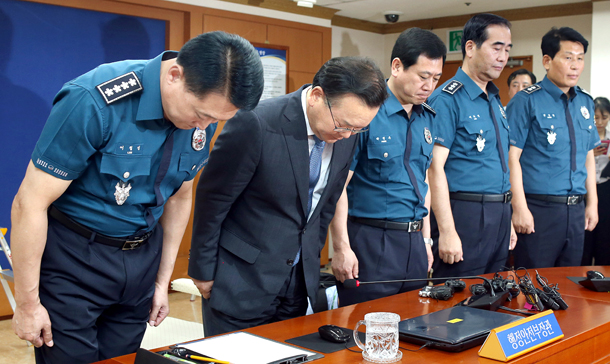 Interior Minister Kim Boo-kyum and the police force’s leadership apologized on Sunday for a recent war of words between two high-ranking police officials that revealed internal discord and embarrassed the agency.

The conflict involved Lee Chul-sung, commissioner general of the National Police Agency, and Kang In-chul, head of the Central Police Academy, and began over a Facebook post.

During the height of protests against former President Park Geun-hye in November last year, the Gwangju Metropolitan Police Agency, which Kang was leading at the time, wrote on Facebook that Gwangju was a “shrine of democratization.”

Kang claimed Lee order him to delete the post, and that began a public round of mudslinging between the two officers in which Lee accused Kang of diverting attention away from an internal investigation into corruption of his own.

“What has taken place recently in the police leadership is embarrassing and calls for an apology to the public,” Kim said at the National Police Agency’s headquarters in central Seoul. “As head of the interior ministry, I bow deeply to express my apology.”