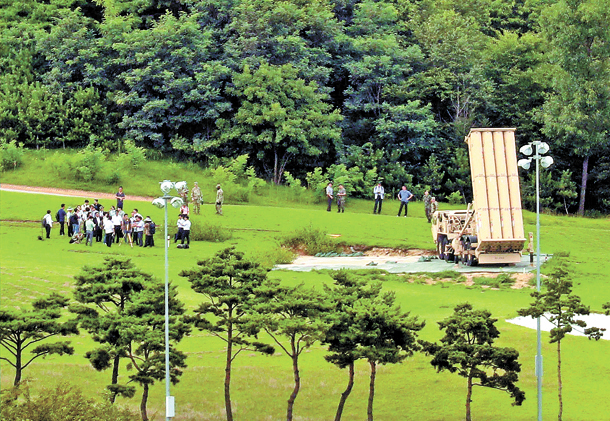 Officials from the ministries of defense and environment conduct a joint environmental survey of electromagnetic waves and noise level of the Terminal High Altitude Area Defense (Thaad) system in Seongju, North Gyeongsang, on Saturday. [GONG JEONG-SIK]

Residents of Seongju County, North Gyeongsang, said Sunday they cannot trust the government test results which deemed safe the level of electromagnetic waves emitted from the Terminal High Altitude Area Defense (Thaad) system, and said they will ask an independent expert to conduct another environmental test on the U.S.-led antimissile defense system.

The Ministry of National Defense and Ministry of Environment conducted an environmental test on the Thaad system in Seongju on Saturday, and announced that the level of electromagnetic waves emitted from the system is safe.

“The nearest town is located some 2 kilometers [1.24 miles] from the Thaad system, so the noise level should not be a problem,” said an official of the Defense Ministry.

The ministry plans to host a public hearing in Seongju on Thursday.

The Seoul-Washington agreement to deploy the Thaad system here to counter military threats from North Korea, announced in July last year, has since been met by opposition from the residents of Seongju and neighboring areas, who cite possibly hazardous effects of the electromagnetic wave emission on the residents and their crops and businesses.

“The government’s test results are not surprising,” said Lee Seok-ju, head of Soseong village. “The Defense Ministry will just keep on trying to force Thaad deployment process on us.”

Key components of a Thaad battery, including a radar system and two missile launchers, were installed on a former golf course in Seongju on April 26, less than two weeks before the May 9 election that brought President Moon Jae-in to power.

A Thaad battery typically consists of six launchers, 48 interceptors, a fire control and communication unit and radar. After the North’s two successful tests of intercontinental ballistic missiles in July, Moon said the remaining four Thaad launchers, stored on a U.S. military base, would be deployed to counter the growing threat.

The Defense Ministry said last month it will conduct a small-scale environmental study for the already deployed components and barracks of the soldiers who operate the system, and that it will also conduct a general environmental assessment for the entire site, formerly used as a golf course.

While the government is not mandated by law to conduct the environmental test in the presence of residents, the Defense Ministry told media outlets that it will try to invite civilians to the test, in order to gain the public’s understanding during the deployment process.

The Defense Ministry had asked the residents of Soseong village last week to pick a representative who will accompany the government officials on the on-site environmental inspection on Saturday.

“We asked the ministry to wait for us until we pick an expert to join their people for the inspection, but it didn’t,” Lee said. “We hadn’t picked our person yet, and they just took off on a helicopter to go into the Thaad system [on Saturday], and we couldn’t do anything.”

Others are stopping the government from conducting its environmental tests.

Residents of Gimcheon, located some 8 kilometers from the Thaad system in Seongju, stopped the government from measuring the level of electromagnetic wave emission in the city on Saturday. Some 100 residents rallied in front of the Korea Expressway Corporation Gimcheon branch office, where the environmental test was to be conducted.

“We don’t want Thaad to be deployed near our living space,” said Lee Tae-jung, head of Nogok village in Gimcheon on Saturday, at a meeting of some 70 residents of Gimcheon.

Residents of Seongju are also rallying 24 hours in front of the entrance to the Thaad site. Some of them said they plan to travel to Seoul to host another rally in front of the U.S. Embassy in central Seoul on Tuesday.