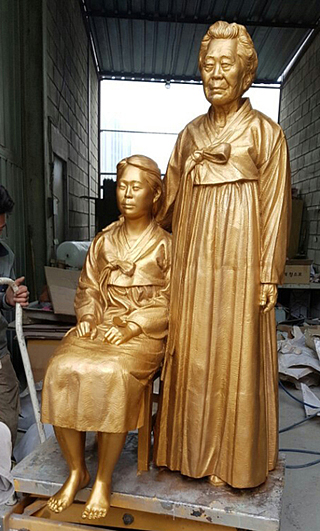 The Peace Monument to be installed in Nam District, Gwangju, today shows “comfort woman” Lee Ok-sun in the past and present. [LEE LEE-NAM]

Eleven statues dedicated to the victims of Japanese wartime sexual slavery known as “comfort women” will be erected throughout the country over the next two days in commemoration of the fifth International Memorial Day for Victims of Japanese Military Sexual Slavery.

The day was established in 2013 to remember Kim Hak-soon, the first Korean victim to make a public testimony regarding Japan’s forced sexual slavery at frontline brothels during World War II, on Aug. 14, 1991.

The first bronze statue of a young girl, called the Peace Monument, was installed in front of the Japanese Embassy in Seoul in 2011, which has become an international symbol of the comfort women’s cause.

The Gwangju city government, which installed a bronze statue of a young girl in front of its city hall in 2015, will be installing five more statues today in five districts across the metropolitan area.

The statue to be installed in Nam District consists of two figures: Lee Ok-sun, a survivor, standing tall beside a seated figure of her former self, a young woman.

“By putting together how Lee looks now and how she looked when she was 16, the statue shows that the Japanese colonial period is something that cannot be forgotten as an event in the past,” said Lee Lee-nam, the artist who created the statue.

Another bronze statue to be installed in Buk District, crafted by artist Choi Jae-deok, shows a girl standing up and about to walk forward. A bird sits on her outstretched right hand, which the artist said symbolizes freedom.

“We wanted a bronze statue that expresses the free and strong will of a young girl,” said Jeong Dal-seong, director of the Peace Monument committee at the Buk District Office.

In addition to the five districts in Gwangju, six other cities and districts around the country will install statues to remember the victims. They include Dobong District and Geumcheon District in Seoul, Yongin in Gyeonggi, Hongseong County in South Chungcheong, Andong in North Gyeongsang and Iksan in North Jeolla.

The statue in Yongin was funded by donations from residents and will be installed in the square outside City Hall. The Yongin government said it would also create an exhibition space inside the building dedicated to victims.

“We decided to install a Peace Monument in the City Hall square to educate everyone about the pains of the country’s past,” Yongin Mayor Jung Chan-min said.

“The significance of these installations is not the increasing number of Peace Monuments but the fact that people are becoming more aware of the comfort women issue,” said Yang No-ja, secretary general of the Korean Council for the Women Drafted for Military Sexual Slavery by Japan.

A diplomatic source said that the Japanese government has recently requested the Korean government refrain from actions that may negatively impact bilateral relations.

The two governments signed a “final and irreversible” deal in December 2015, when President Park Geun-hye was in office in Korea, to resolve the comfort women issue through an apology issued by the Japanese government and a 1 billion yen ($9.1 million) fund for the victims. But the new administration led by President Moon Jae-in has questioned the agreement’s transparency.

The National Institute of Korean History on Friday released internal documents written by the Allied Forces during World War II that corroborate the existence of military brothels and comfort women.

In a report, a Japanese soldier captured in Indonesia is quoted to have said that there were “some 150 women” including Koreans, Japanese and Indonesians at seven brothels in a district. The internal documents contain similar testimonies from captured Japanese soldiers and also corroborate the Japanese military’s involvement in wartime sexual slavery.