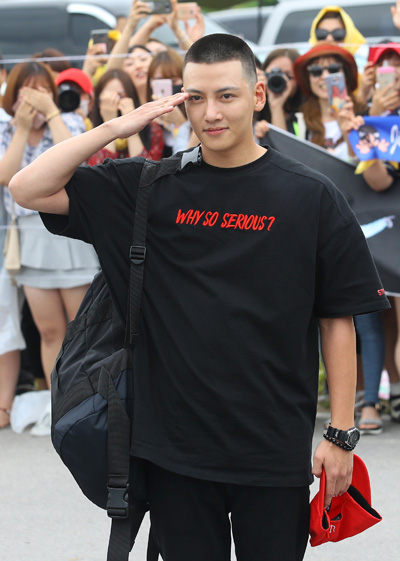 Actor Ji Chang-wook enlisted in the Army on Monday to begin his mandatory military service.

The 30-year-old star, who has a large following in Japan as well as at home, entered a boot camp in Cheorwon, Gangwon, to begin five weeks of basic training before entering active duty. All able-bodied South Korean men are required to complete about two years of military service.

He was seen off by his international fans who began gathering in front of the main entrance to the boot camp early in the morning.

Upon arriving in a black T-shirt and red cap, Ji made a military salute in front of a group of reporters.

With no special send-off ceremony planned, he waved his hands toward his fans and briefly said “Thank you” before entering the camp.

Ji gained fame in Japan and across Asia for his role in the 2014 MBC series “Empress Ki.” After the series, he has appeared other TV series such as “Healer,” “The K2” and most recently in “Suspicious Partner.”