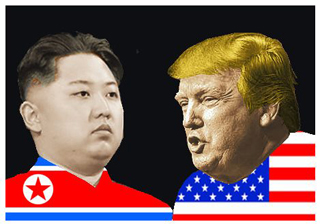 It is truly strange. The United States, the most powerful country in the world, and North Korea, which does not even have enough food to feed its people, are threatening each other. After U.S. President Donald Trump mentioned “fire and fury,” North Korean leader Kim Jong-un countered it with “enveloping fire” on Guam.

According to the Stockholm International Peace Research Institute (SIPRI), the United States is the biggest defense spender in the world, spending $661 billion last year. It is greater than the total military budgets of the countries ranked second to eighth: China’s $216 billion is the second, Russia’s $69.2 billion is in third and Japan’s $46.1 billion is eighth. Unfortunately, the SIPRI data does not include North Korea’s military expenditure, as Pyongyang does not disclose it. According to a recent report by the Hansun Foundation for Freedom and Happiness, North Korea’s defense budget is estimated to be $8.3 billion as of 2015. It is not precise data, but the United States spends about 74 times more than North Korea.

Despite the significant difference, North Korea and the United States continue to throw threats at each other. After Washington and Pyongyang failed to reach an agreement on February 29, 2012, Uncle Sam turned to “strategic patience” and the two have not had an official meeting. There have been a number of semi-governmental, semi-private track 1.5 contacts, but they did not produce meaningful results.

That probably led us here as the United States does not know how to deal with North Korea. Former CIA director and Secretary of Defense Robert Gates called North Korea an “intelligence black hole” and said it was the hardest country to do espionage work in. Former U.S. Ambassador to Korea Donald Gregg, who oversaw the CIA Seoul office in the early 70s, said that intelligence activities never failed in any country other than North Korea.

The U.S. intelligence officials’ mindset could be seen in historical events. The capture of the USS Pueblo spy ship, in January 1968, and the Panmunjom axe murder incident in August 1976 are some examples. After 11 months of negotiations, the Pueblo crisis was settled as the United States signed an apology. The axe murder case was settled with Kim Il Sung’s extension of “regret,” not “apology,” when two U.S. Army officers were killed by North Korean soldiers. The two incidents brought the situation on the brink of war, with aircraft carriers being mobilized both times, but the United States failed to have North Korea kneel.

Will Kim Jong-un and Trump follow precedent? Washington and Pyongyang are reportedly seeking an escape carefully. The Associated Press reported that the United States and North Korea have been making secret diplomatic contacts over the past few months. August 15 is the 72nd anniversary of the liberation of Korea. President Moon Jae-in must be carefully writing his Liberation Day address. Hopefully, he would not limit the message to the so-called August crisis but also address the future after the crisis. At the climax of tensions, Pyongyang and Washington may make a dramatic turn towards talks.