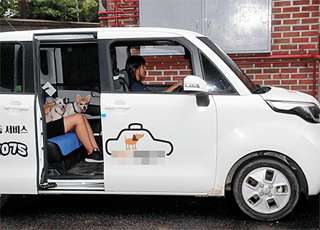 Two dogs and their owner ride a pet taxi on Thursday. The company started with one car last August and recently expanded to nine. “We receive reservations over phone, and the number of users per day is roughly 50,” CEO Park Na-ra said. [KANG JUNG-HYUN]

Kim Hae-rang, a resident of Suyu-dong in northern Seoul, strapped her two dogs in the backseat of a taxi one Thursday afternoon and then hopped into the front seat.

“Ssangmun-dong,” she told the driver. Their destination was a pet salon about 2 miles away, where her dogs get their routine grooming done.

In the back, the dogs were barking and running around, but the driver, Sung Yoo-hyun, didn’t seem to mind. “We have free training pads,” she told Kim, “so tell me if you need them.” Luckily, she didn’t.

Sung is one of many drivers in Korea that operate pet taxis specifically catering to owners and their furry friends. They are actually privately owned vehicles, but they charge prices in a similar manner to yellow cabs, and the owners don’t even have to ride with their pets. Some drivers will transport the pets by themselves. The basic fee for Sung’s pet taxi service is 11,000 won ($9.60), and every 142 meters beyond the first 2 kilometers (1.24 miles) costs 100 won.

In Seoul, there are now around 10 companies that connect pet owners with drivers. None existed two years ago, reflecting the fast growth of pet ownership in Korea. And since current laws allow bus and taxi drivers to refuse to transport pets unless they are inside carriers - with the exception of guide dogs - the pet taxis are very popular among pet owners.

The company that Kim used started business with just one car last August and is now operating nine to keep up with demand. “We receive reservations over phone, and the number of users per day is roughly 50,” the company’s CEO, Park Na-ra, said.

Passenger cab drivers are crying foul over the new pet taxi services, saying they’re illegal because they are using privately owned cars instead of those registered for commercial use.

“Regular taxis are subject to strict regulations of a similar level to public transportation,” said a source at the Seoul Private Taxi Association. “It’s wrong to conduct a business similar to taxis using privately owned vehicles.”

What cab drivers call illegal is the transport of owners with their pets because it provides a similar service to passenger taxis. According to pet taxi industry statistics, 30 percent of rides are carrying pets alone and 70 percent include the owner.

One pet taxi company rebutted the claim, saying the price is for transporting pets alone and that owners are not charged an additional fee if they ride along. The Seoul Metropolitan Government has recently looked into the legality of pet taxis.

“Laws on freight and passenger cars restrict privately owned vehicles from operating on fees, but none of them can regulate the pet taxi industry for now” said Yang Wan-soo, head of the city government department that oversees taxis.

Freight laws prohibit vehicles made for personal use to carry cargo for a fee, but pet taxis are passenger cars in terms of vehicle category. Still, rules on passenger cars don’t apply either because the object of transport is animals, not people.

“If owners aren’t additionally charged for getting in a pet taxi, it’s hard to say that the act is illegal because the payment is not going toward transporting a person,” said Song Tae-ho, an official at the Ministry of Land, Infrastructure and Transport. “However, there is a need to further consider whether the basic prices include the cost of transporting a person.”

But Kang Sang-wook, a researcher of public transportation at the Korea Transport Institute, notes that overall, “pet taxis might actually boost the quality of taxi service.”