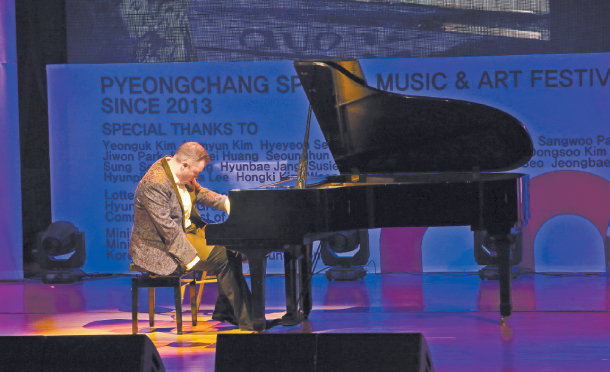 One-handed pianist Nicholas McCarthy performs on Saturday at the Concert Hall of the Alpensia Resort in Pyeongchang, Gangwon as part of the PyeongChang Special Music & Art Festival. [SPECIAL OLYMPICS KOREA]

Just as the Paralympic Games immediately follows the Olympic Games, the PyeongChang Special Music & Art Festival held last week at the Alpensia Resort in Pyeongchang, Gangwon, picked up right after the finish of this year’s 14th PyeongChang Music Festival and School.

The PyeongChang Music Festival and School was created in 2004 as an annual event to help the bid for hosting the Olympic Games, which are finally set to kick off on Feb. 9.

In an effort to allow a platform for musicians with disabilities to learn music and perform in front of the public, Special Olympics Korea created the festival in 2013 and has been going on ever since.

This year, under the theme “Together We Can! Together We Play!,” about 130 musicians with developmental disabilities from 26 countries around the globe came together for concerts and master classes at the Alpensia Resort.

At the opening concert on Thursday, cellist Chung Myung-wha and other young musicians including pianist Cho Jae-hyuck and flutist Cho Sung-hyun performed with disabled artists, such as violinist Park Sang-jin, cellist Cha Ji-woo, and others.

On Saturday, during the “Caring Concert,” British pianist Nicholas McCarthy, who was the first left-hand-only graduate from the Royal College of Music in London, held a performance and encouraged the many young musicians participating in the festival to continue to work hard in their artistic endeavors.

Renowned musicians including vocalist Seo Hye-yeon, who is currently a professor at Seoul National University as well as double bassist Minje Sung, also held master classes during the festival to share their talent and experiences with musicians with disabilities.

“We hope the festival can act as a platform for the general public to witness the talents these musicians with developmental disabilities have and have the opportunity to look beyond physical appearances,” said Liberty Korea Party Representative Na Kyung-won, who was the head of the festival’s organizing committee.

Although the 2018 PyeongChang Olympic Games will come to an end next March, the organizers of the festival said that they will continue to hold the unique festival annually so that musicians with disabilities will have more opportunities to perform in front of the public.