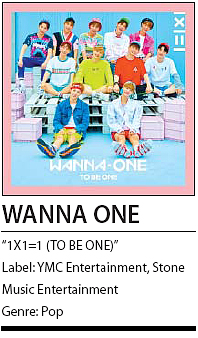 It is safe to call this 11-member act one of the hottest rookie K-pop groups of 2017. Wanna One is a boy group that came together on the megahit Mnet audition program “Produce 101.”

On this seven-track album, the track “Burn It Up” stands out for being filled with confident and ambitious lyrics, which best suits the group’s young and cheerful vibe. On this powerful EDM house track, the repetitive hook amplifies the song’s power and will leave a lasting impression to the group’s young fans.

The lead single “Energetic” is more of a typical K-pop track which fuses dance music with pop, but with a hint of a ballad as well. The radio-friendly single is the work of production team Flow Blow in a collaboration with Hui, who is the leader of the boy band Pentagon. With the combination of a catchy piano melody that starts off the track and strong beats when the chorus kicks in, this earworm will surely be remembered by both fans and casual listeners.