A comeback years in the making

A comeback years in the making 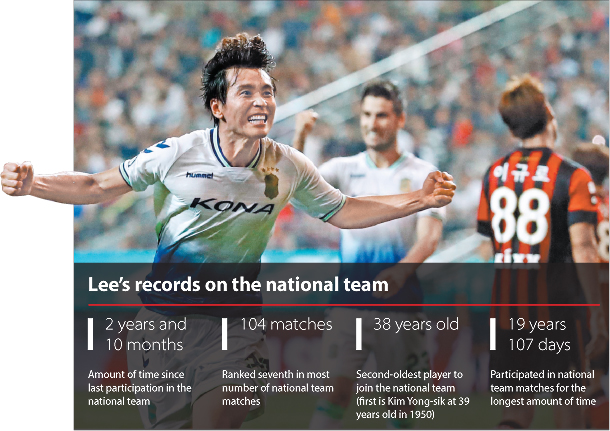 Lee Dong-gook, a striker for Jeonbuk Hyundai Motors, celebrates after scoring a goal against FC Seoul on July 27. [YONHAP] 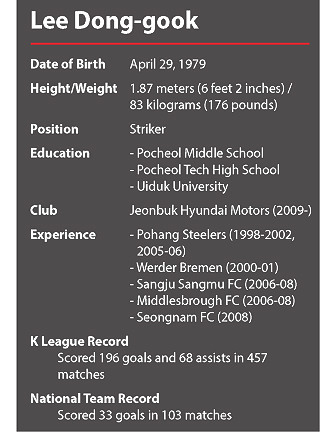 The lineup includes multiple players in their 30s, fulfilling a promise that Shin made when he was first appointed to the position last month. Of them, Lee Dong-gook has received the most attention because he is returning to the team after a more than two-year hiatus.

The last time Lee represented Korea on the international stage was a friendly match against Costa Rica in October 2014. The 39-year-old striker for Jeonbuk Hyundai Motors is expected to be the national football team’s problem solver and hopefully lead them to their ninth consecutive World Cup appearance. Although many have expressed concern about the inclusion of Lee on the team, given his age, Lee’s experience and leadership will be an asset for the younger players.

And they’ll have plenty of mentors. Until now, the team mostly comprised players in their mid-to-late 20s. In addition to Lee, they’ll also have Yeom Ki-hun, 34, of the Suwon Samsung Bluewings and Lee Keun-ho, 32, of Gangwon FC.

“Since he [Lee Dong-gook] is older, I expect him to take charge of the team’s atmosphere, but that’s not all I expect from him,” Shin said during a press conference at the Korea Football Association headquarters in Seoul. “Basically, I added Lee to the roster because I saw his ability to compete in K League matches. The veteran players will motivate younger players to work harder.”

Lee’s experience with the national team has been anything but smooth. He first joined the roster as a high school student, making him the youngest member of the team competing in the 1998 World Cup in France.

But he wasn’t able to keep up his stride, and right before the 2002 World Cup match between Korea and Japan, Lee sustained injuries that knocked him out of consideration for the team. Then two months before the 2006 World Cup in Germany, Lee tore his right ACL.

Although he was able to represent Korea at the 2010 World Cup in South Africa, he was heavily criticized by fans for missing a chance to score in the round of 16 match against Uruguay.

Just when it seemed as if Lee’s career was going downhill, his fortunes turned after he joined Jeonbuk in 2009. The club has offered him a chance to hone his skills, and he has managed to score two-digit goals every season, quickly becoming one of the K League’s star strikers. Throughout Lee’s 19 years in the league, he has scored a total of 196 goals in 457 matches. More than half of them were scored while playing for Jeonbuk.

With just two matches remaining on the road to the World Cup, Korea is in a precarious position. The team is ranked second with 13 points, but since they are only one point apart from Uzbekistan, they must win both remaining matches to earn their berth in the World Cup.

Korea will play against Iran, which has already finalized its place in the World Cup, on Aug. 31 and Uzbekistan on Sept. 5.

“I’m still careful about joining the national team at my age right now,” Lee said during a phone interview with the JoongAng Ilbo. “Since Korea is in a crucial situation for the World Cup, I feel a lot of burden. But I’ll bring back the team’s competitiveness and make our ninth consecutive World Cup appearance.”

While Shin has tapped Lee to manage the team’s flow during the game, he has mostly held on to players from the Chinese league for the team’s defense, which has long been considered a weakness. He recruited new faces for midfield positions but chose to stick with the same members for defense and focus on perfecting their skills.

“It’s true that the team’s defense was a little weak while Uli Stielike [Shin’s predecessor] was managing the team,” Shin said. “Just like the K League players, the players in the Chinese league also got approved for an early call up on Monday. Through 10 days of training, we can work on strengthening our teamwork.”

As expected, power players Ki Sung-yueng of Swansea City and Son Heung-min of Tottenham Hotspur were included in the roster. Both have been recovering from injuries sustained earlier this year.

“Son played in his Premier League season opener on Sunday, and Ki is recovering faster than expected,” Shin said.