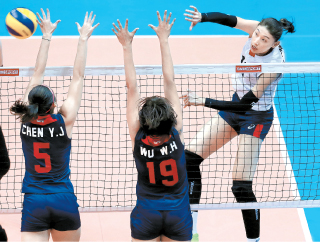 Kim Yeon-koung, right, hits through two defenders during a quarterfinal match against Chinese Taepei in the 2017 Asian Women’s Volleyball Championship at Alonte Sports Arena in Binan, Philippines, on Sunday. [XINHUA/YONHAP]

Despite Korea’s struggle, Kim Yeon-koung once again excelled, with three consecutive kills during the first set to allow a 22-17 lead. Chinese Taipei got as close as 22-20, but after a kill from Kim Yu-ri’s to bring the score to 24-20, Kim Yeon-koung finished the set with a service ace.

Though Korea easily won the second set, 25-11, the third set took longer than expected. Chinese Taipei fought to keep the score close, and close calls from the referees seemed to go in favor of Chinese Taipei. While tied at 26-26, a Kim Yeon-koung kill forced match point and after an unforced error, Korea won the match.

Kim Yeon-koung led Korea with 17 points, the most among the two teams on the court.

The team, led by head coach Hong Sung-jin, has now won all six games since the preliminary group matches and successfully advanced to the semifinals. Needing to improve their world ranking to get an easier seed for Asia qualification for the 2020 Tokyo Olympics, Korea has taken on a rough schedule since June.

Before the start of the tournament, there had been issues regarding a lack of support from the Korea Volleyball Federation Association, as they had to participate without a full roster in two consecutive international tournaments. Before leaving for the Philippines, Korea had a total of 19 players on the entry list, but six players were unable to join the team due to injuries.

The issue regarding players missing international events due to injury received greater attention after Kim Yeon-koung was quoted as saying, “There more than 20 games that need to be played in the Grand Prix and the Asian Championship, but only six or seven players play regularly.”

When Kim Yeon-koung mentioned Lee Jae-young, who was unable to join the team due to an injury, it became a bigger issue. Making it worse, center Yang Hyo-jin will make an early exit from the tournament due to a back injury.

During the third set of Korea’s match against Kazakhstan in the classification round Saturday, Yang felt a sudden pain in her back and was carried off the court in a stretcher.

With that, Korea will now have to play the remaining games with two fewer players.

Korea will play in the semifinal match at 6:30 p.m. today.