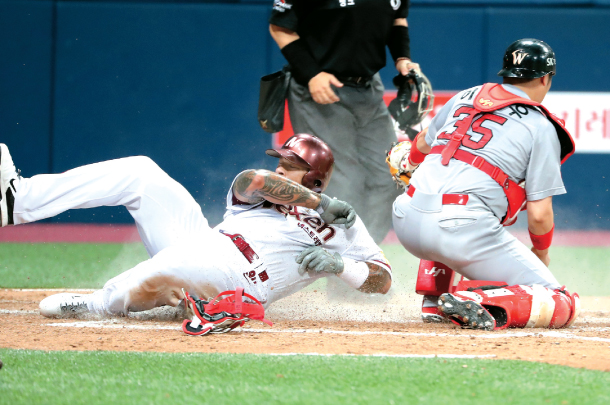 Lee Sung-woo, right, protects home plate as Michael Choice of the Nexen Heroes slides in during a game on Aug. 1 at the Gocheok Sky Dome in southern Seoul. [KIM MIN-KYOO]

Lee Sung-woo is the 27th player on the SK Wyverns’ entry list, which means he is most likely to be demoted to the Futures League.

When Lee was traded to the Wyverns from the Kia Tigers in April, he received his Wyverns uniform on June 15 and hasn’t returned to the Futures League since. 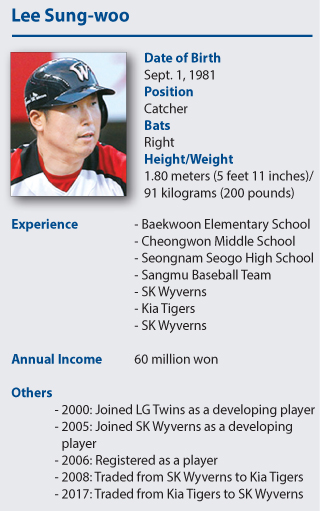 “It is difficult physically, but I was just really happy,” Lee said. “I’ve been a professional baseball player for 18 years and 2017 is the first season where I played as a starting player in five consecutive games.”

In the beginning of the season, when Lee was playing for the Tigers, he was excluded from the spring training roster, so he had to train in Hampyeong, South Jeolla. At the time, he trained as though it was his last season. But the unexpected trade was a great motivator. And since then, he has continued to play in the starting lineup.

“If I’m tired, that’s probably just an excuse,” Lee said. “I’m given chances to play so I try not to leave any regrets.”

Though he may have felt snubbed by being traded, he believed it joining the Wyverns would allow him more opportunity to play.

When Lee first decided to go pro, he spent three years with the Twins as their developing player.

“I started playing for the Sangmu team in November, but before I decided to join the military team, I was told I was released from the team,” Lee said. “So I went to the Wyverns’ tryout and got accepted as a developing player in 2005.”

After a year as a developing player, Lee finally made his debut as a professional player in July 2006, and in 2008, the Wyverns traded him to the Tigers, where he spent most of his time in the Futures League - and in June, he was once again traded back to the Wyverns.

“Honestly, it was very difficult,” Lee said. “While in the Futures League, I thought of quitting multiple times.”

As a backup player, Lee finds the role becomes more difficult the more he plays. Unlike starting players, who are guaranteed a next time, backup players prepare each game with no certainty as to when they’ll be able to play again.

“One time, I got called up to the KBO for about two weeks and played in only one game,” Lee said. “Since I know the difficulty of being a backup player, I want all my games to be successful.”

Lee has been on the KBO for a little over two months now, and believes he needs to improve his batting and throwing.

“I never regretted playing baseball,” Lee said. “I even thought of quitting when I was just a developing player. But now, I’m given so many opportunities to play in KBO games.”

Lee doesn’t consider himself successful, as he’s still not a free agent or a highly-paid player. But considering the challenges he’s faced throughout his career, he’s thankful for the opportunity he has now.