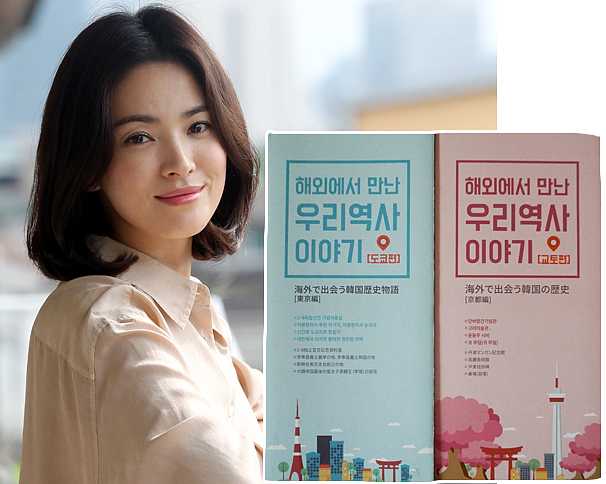 Actress Song Hye-kyo and Professor Seo Kyoung-duk from Sungshin Women’s University donated 10,000 guidebooks about the Korean historical sites located in Kyoto, Japan to guest houses in the area in celebration of Korea’s Independence Day on Tuesday.

On Tuesday, professor Seo posted a photo on Twitter of the guidebook which introduces Korean historical sites located in Kyoto, such a tombstone of Korean poet Yoon Dong-ju, the Tabamangan Museum, the Koryo Museum and more. In March of this year, she released a Tokyo version of the guidebook.

The pamphlet, which is produced in both Korean and Japanese, was organized by Seo, and Song paid for production costs.

This is not the first time that the two have worked together, as Song has been sponsoring the production of Korean guidebooks since 2012. That year she helped publish the Korean language brochure.

Song, who appeared on 2015 KBS drama “Descendants of the Sun,” will marry actor Song Joong-ki who also starred in the hit drama on October 31.