Kim is enjoying the moment

Kim is enjoying the moment 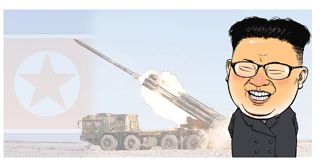 The more North Korea repeats provocations, the more the international community pays attention to China. U.S. President Donald Trump and South Korean President Moon Jae-in are no exception. We all believe that if China really wants to get involved, North Korean nuclear tensions will be resolved.

Some common themes are: “If oil supply is stopped, North Korea won’t last three months” or “If China blocks the border, North Korea will surrender in the end.”

However, I’ve met a number of Chinese experts who do not agree with these premises. They say that suspension of oil supply won’t make North Korea surrender. Having endured an extreme economic hardship during the Arduous March, North Korea is not as vulnerable as the rest of the world expect.

But it certainly hurts. If extreme sanctions continue for three years, not three months, what will happen? “If nuclear North Korea chooses to self-detonate as it will fail anyway, what will South Korea do?” the experts often respond. China is confident that it knows North Korea better than any other country, as it has dealt with the North for a long time.

A more fundamental reason for China’s reluctance on strengthened sanctions can be found in its strategic interests. China does not want North Korea’s collapse as a result of strong sanctions when it hasn’t been fully prepared to the scenario.

Beijing does not want a Seoul-led unification while the South Korea-U.S. alliance is maintained. China would rather have the Kim Jong-un regime survive and serve as a buffer, albeit a nuisance, rather than collapse. China gives a lifeline to North Korea despite international criticism not because it favors North Korea or treasures the blood brotherhood, as many mistakenly believe.

Then, how can we induce China’s participation in sanctions? It will only be possible after China discusses and reaches an agreement with the U.S. on the scenario on the future of the Korean Peninsula. It will include consensus on the U.S. Forces stationing in Korea, installation of a military buffer zone and control of nuclear weapons in the North Korea territory after a unified government chosen by the directly involved parties on the peninsula.

It could be an even harder task than negotiating with Kim Jong-un on nuclear abandonment.

In this situation, it is not wise for America and China to rupture and be willing to wage a trade war. The one who enjoys the moment is none other than Kim Jong-un. He is seeing through the strategic rivalry between the United States and China and exploits it to adjust the speed of nuclear and missile tests. The clock loaded on North Korea’s nuclear missile is ticking even at this very moment.