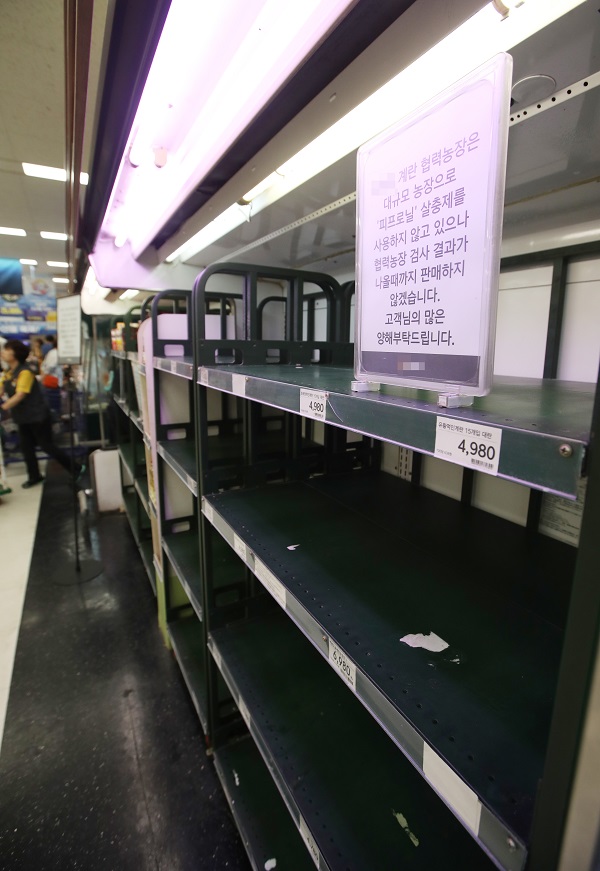 Three major discount retailers in Korea announced Tuesday that they will immediately suspend egg sales after the government found some eggs raised in Korea were contaminated with a pesticide called fipronil which is banned for use on hens. [YONHAP]

Major retailers suspended egg sales nationwide Tuesday after the government found some eggs farmed in Korea were contaminated with pesticides.

Emart, Lotte Mart and Homeplus announced Tuesday that they were immediately suspending sales of eggs, pulling them from shelves and discontinuing purchases of eggs from suppliers. The announcement was followed by a similar decision at Nonghyup Hanaro Mart, major convenience stores and online retailers in Korea.

"We don't source eggs from the contaminated farms mentioned by the government but decided to suspend sales as a preventive measure to ensure customers’ safety," said a spokesperson at Lotte Mart.

Two other discount retailers also said they didn’t buy supplies from the contaminated farms.
The Ministry of Agriculture, Food and Rural Affairs revealed Tuesday that some eggs produced at a Namyangju, Gyeonggi,-based egg farm contained excessive amount of fipronil, a type of pesticide not allowed to be used on hens. This farm raises 80,000 hens and has the capacity to produce 25,000 eggs per day.

Fipronil is the same pesticide found in eggs in Europe, which has led to a massive recall.
The ministry said some of the eggs produced at the farm contained 0.0363mg/kg amount of Fipronil, which exceeds the Codex international standard of 0.02mg/kg. In Korea, however, there is no official standard set for this pesticide.

The ministry also said an egg farm in Gwangju, Gyeonggi, was found to have delivered eggs that contain excessive amount of bifenthrin, a pesticide used to control borers and termites. Some of the eggs produced at this farm, which has 60,000 hens and is able to lay 17,000 eggs per day, were found to contain 0.0157mg/kg amount of bifenthrin. The Korean standard is set at 0.01mg/kg.

As a preventive measure, the ministry banned Korea’s approximately 1,300 farms from shipping eggs starting on Tuesday at midnight. It said it will investigate pesticide contamination within the next three days. Only farms that pass the ministry's probe will be allowed to sell their eggs.

In collaboration with provincial governments, the Ministry of Food and Drug Safety will look into where the contaminated eggs were shipped and retrieve the entire supply. It has started investigating four wholesalers that buy eggs from the Namyangju-based farm.
Fipronil was detected at the Namyangju-based farm during a regular government check on pesticide residue on farms registered for use of antibiotics.

"The Ministry of Agriculture, Food and Rural Affairs has been continuously doing pesticide residue tests but this is the first time fipronil was found," the ministry said in a statement. Industry insiders speculate the number of pesticide-tainted farms will increase when the government investigates farm not registered for use of antibiotics.

According to the World Health Organization, fipronil is "moderately toxic" when ingested in massive quantities, causing nausea and vomiting.
Fipronil is behind the widening egg scandal in European. Millions of eggs have been pulled from shelves of supermarkets in 17 countries, according to local reports.

The pesticide problem follows an egg shortage earlier this year after an avian influenza outbreak that pushed egg prices up 50 percent. They have yet to return to normal. According to the Korea Agro-Fisheries & Food Trade Corporation on Tuesday, a tray of 30 standard sized eggs that sold wholesale for 5,350 won ($4.71) last year is currently selling for 7,595 won.

"During the avian influenza crisis, only selected farms were banned from retailing eggs but this time all farms in Korea are on a temporary halt from delivering eggs," said a source from the retail industry. "It is likely the price will go up if the current situation continues.”
BY JIN EUN-SOO [jin.eunsoo@joongang.co.kr]