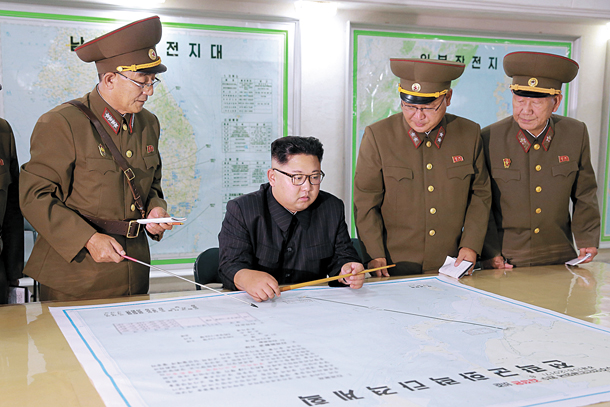 North Korea’s Strategic Force reported an operational plan for attacking the waters near Guam to leader Kim Jong-un Monday, who examined it for a “long time” and warned the United States to cease its “reckless actions” unless it wanted the North to follow through, according to the state-run Korean Central News Agency (KCNA) Tuesday.

But any action by Kim depends on Washington’s behavior going forward.

It was the latest twist in Pyongyang’s threatening of Guam, which began Aug. 9 when the country threatened to fire a Hwasong-12 intermediate-range ballistic missile near the American island in the Western Pacific, which hosts strategic U.S. military bases.

The operational plan, said KCNA last week, was to be thoroughly examined, after which it will be reported to the Supreme Command and await Kim’s final order.

Last Thursday, the North said four Hwasong-12 missiles would fly over Japan to land 30 to 40 kilometers (19 to 25 miles) away from Guam, adding that the plan would be completed by mid-August to be reported to Kim.

The North never mentioned when exactly the missiles would be unleashed, only saying that Kim had the final call and that his decision hinged on Washington’s behavior.

Kim “examined the plan for a long time and discussed it with the commanding officers in real earnest,” said KCNA, adding that the leader praised the Strategic Force for drawing up a “close and careful plan as planned.”

In order to defuse tension on the Korean Peninsula and prevent a military conflict between the North and the United States, Kim was said to have advised Washington to “make a proper option first and show it through action.”

Kim was also quoted as saying by the KCNA in an English dispatch that he would “watch a little more the foolish and stupid conduct of the Yankees spending a hard time of every minute of their miserable lot,” before deciding whether to carry out his threat against Guam.

The Strategic Force is “firmly determined to score the final victory in the standoff with the U.S. by scorching with a super strong strike the targets in South Korea, Japan, operational area in the Pacific and the U.S. mainland” once Kim gives an order, the KCNA report said.

“I think if they fire at the United States, it could escalate into war very quickly, yes. That’s called war, if they shoot at us.”

Asked by a reporter how the U.S. would respond to North Korea if it targeted waters near the island, Mattis said it would become an issue that “we take up however the president chooses.”

“You can’t make all those kinds of decision in advance,” he said, according to transcripts released by the Pentagon. “There’s a host of things going on. There are allies that we consult with.”

Mattis said Guam was “well protected” and that Washington would know if any missiles were headed towards the island “within moments.”

China’s Foreign Affairs Ministry, which has urged Washington and Seoul to scale down joint military exercises in exchange for Pyongyang’s freezing its nuclear and missile development programs, welcomed an offer of dialogue by South Korea’s President Moon Jae-in in a speech marking Liberation Day Tuesday.

Beijing has reacted mildly to last week’s war of words between Washington and Pyongyang, going only so far as to urge Pyongyang to stop its provocative behavior.

China, which accounts for nearly 90 percent of North Korea’s international trade revenue, has been unwilling to use its leverage out of fear of destabilizing the regime and sparking a flood of refugees crossing the border.

U.S. President Donald Trump has expressed frustration over China’s reluctance to rein in North Korea, and on Monday signed an executive memorandum ordering his trade representative to examine whether China should be investigated for “unreasonable or discriminatory policies that may harm American IP [intellectual property] rights, innovation or technological development,” according to the White House.

The trade representative will decide whether to launch a formal investigation, and if so, whether action should be taken, the office added.

Trump had been holding off the probe for months, hoping Beijing would help more with Pyongyang.

If the American official doesn’t, and takes measure that harm bilateral economic and trade relations, the ministry said it would “definitely not sit by, but take all appropriate measures to resolutely safeguard its legitimate rights and interests.”

On Monday, the Chinese Commerce Ministry announced a ban on North Korean imports of iron, iron ore, lead and coal effective Tuesday, part of a package of UN Security Council sanctions that is expected to affect a third of its $3 billion international trade.