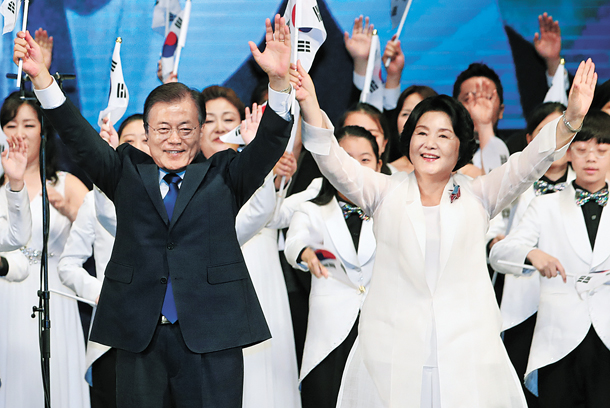 President Moon Jae-in on Tuesday reiterated his promise to prevent a military conflict on the peninsula, saying his government would “do all it can” to keep it from happening.

The commander in chief’s promise comes amid heightened tensions on the peninsula triggered by an exchange of threats between Pyongyang and Washington over the past week, each warning of dire consequences if the other launches a military attack.

In full recognition of the high stakes involved, Moon said the North Korean nuclear and missile issue is “the biggest challenge facing” his administration.

His speech commemorated the 72nd anniversary of Liberation Day - freedom from Japanese colonial rule - and was delivered to a packed audience at the Sejong Center for the Performing Arts in central Seoul.

Moon continued it was solely up to his government to “make the decision for military action” here, emphasizing that without his consent, “no country can determine” to take such action.

That was a refining of a remark made during a phone conversation with U.S. President Donald Trump last week, during which Moon said there must be no outbreak of war on the Korean soil.

While saying the issue must be addressed in a peaceful manner in the Tuesday speech, he also remarked that his position was no different from that of the Trump administration.

Over the past few days, the United States and North Korea hurled verbal vitriol against each other with Trump warning Pyongyang it would face “fire and fury like the world has never seen,” if it provoked the United States or its allies.

Moon also noted that levying sanctions against the Kim Jong-un regime and pursuing dialogue with it should be pursued simultaneously, citing a past case of reaching an agreement with Pyongyang on halting its nuclear program through dialogue.

“Applying sanctions against the North and pursuing dialogue are not a matter of one thing having to be done before the other,” remarked Moon. “The past history of the North Korean nuclear problem showed that a clue to resolving the problem was found when sanctions were combined with dialogue.”

Moon was apparently referring to a joint agreement reached in 2005 in six-party talks that led Pyongyang to agree to drop its nuclear and missile program in exchange for aid and a guarantee of security.

That agreement was reached when the Roh Moo-hyun government, for which Moon served as senior presidential secretary and chief of staff, pursued the Sunshine Policy of engagement of Pyongyang.

The agreement, however, fell through less than a year later when the George W. Bush government froze North Korean assets in a bank in Macau, leading to the North’s first nuclear test on October 9, 2006.

Moon said the first step in resolving the North Korean issue is for Pyongyang to freeze its nuclear and missile programs. Under such conditions, an opportunity for dialogue would be created, he said.

He warned that if the North continued nuclear and missile development, his government would be compelled to “further enhance sanctions and pressure against the North,” while urging the North to “stop provocations immediately and come forward for dialogue.”

Moon, however, did not elaborate what options his government has on further sanctions at a time when all inter-Korean communications have been cut off and with no economic cooperation between the two sides.

He said the North’s entry into dialogue accompanied by its abandonment of nuclear and missile programs would create a situation “in which it does not have to worry about its security even without nuclear weapons.”

The state-run Korean Central News Agency (KCNA) reported early Tuesday that North Korean leader Kim Jong-un was briefed on his military’s plan for “an enveloping fire at Guam” and “examined the plan for a long time.”

Kim was also quoted as saying by the KCNA in an English dispatch that he would “watch a little more the foolish and stupid conduct of the Yankees spending a hard time of every minute of their miserable lot,” before deciding whether to carry out his threat against Guam.

Moon’s Liberation Day speech was a reaffirmation of his pledge that Seoul would be at the helm of driving inter-Korea relations, not to be ignored or neglected by foreign powers in addressing the North Korean issue.

He also made clear his opposition to any form of military action on the peninsula while Washington appeared to have considered it, at least partly, in case of escalated tensions or signs of the North’s imminent missile launch targeting U.S. territory.

“Moon’s strong position on keeping peace here will contribute to easing tensions on the peninsula in the short run,” said Cheong Seong-chang, a senior researcher at the Sejong Institute.

But he said Moon’s urging of Pyongyang to put the brakes on its nuclear program will not be enough to persuade the North unless much greater economic sanctions were applied.

“The only country that can make North Korea come to the negotiating table is China,” Cheong continued, citing Beijing’s economic leverage over Pyongyang.

Without Beijing’s action, Cheong said, hope for a change of heart in Pyongyang was “unrealistic.”

Moon spent a considerable portion of his speech addressing the North Korean issue, and much less time on Seoul-Tokyo relations.

Moon stressed the importance of Japan sincerely apologizing for its wartime misdeeds against the Korean people, especially sex slaves euphemistically called “comfort women,” pointing out it was Japan’s “inconsistent acknowledging of this history” that stood in the way of better relations.

“Resolving historical issues between Korea and Japan, including wartime sexual slavery by the Japanese military and forced mobilization of labor, should be based on international principles that include the restoration of the honor of the victims and compensation, the clarification of the truth and a promise to prevent any recurrence,” said Moon, who promised that he would uphold “these principles under all circumstances.”

In a departure from his predecessors’ Liberation Day speeches, Moon did not address economic policies. Moon is expected to touch upon economic policy at a press conference Thursday to mark the 100th day of his administration, which was inaugurated on May 10.

For the first time in a Liberation Day speech, Moon spoke of “popular sovereignty,” which he said was “ushered in” by candlelight vigils that helped forced his predecessor Park Geun-hye from office.