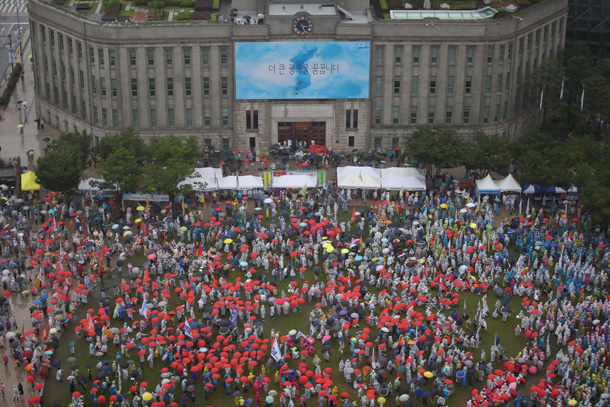 Liberal civic groups hold a joint rally in Seoul Plaza on Tuesday to oppose the deployment of the Terminal High Altitude Area Defense (Thaad) in Korea and to wish for peace on the Peninsula. [YONHAP]

“No more war!” people shouted as they held up red umbrellas together, followed by others who chanted, “No more America!”

The rally was organized by an association of some 200 civic groups, including the Korea Alliance for Progressive Movement. Organizers said some 10,000 attended the event, while police estimated about 6,000.

“No more Thaad,” protesters chanted, using the acronym for the Terminal High Altitude Area Defense system that Washington and Seoul agreed to deploy in Seongju County, North Gyeongsang, to defend against military threats from North Korea.

“The country is in a security crisis, and should refrain from provocative joint military exercises,” said an organizer of the rally. “The Moon Jae-in administration is merely continuing the policies of the previous Park Geun-hye administration of strengthening the Korea-U.S. alliance while pressuring the North with one-sided and hostile policies.”

The organizers submitted a petition to the Seoul Administrative Court to protest the police decision, but the court on Monday upheld the decision.

“The rally may inflict harm to the function and well-being of the embassy,” the court said in its ruling, dismissing the petition. “Embassy staff may feel trapped inside the building if rally participants surround the building.”

The court said the people may rally at the front of the embassy building instead. It had allowed the anti-Thaad rally to surround the U.S. Embassy building for 20 minutes on June 24.