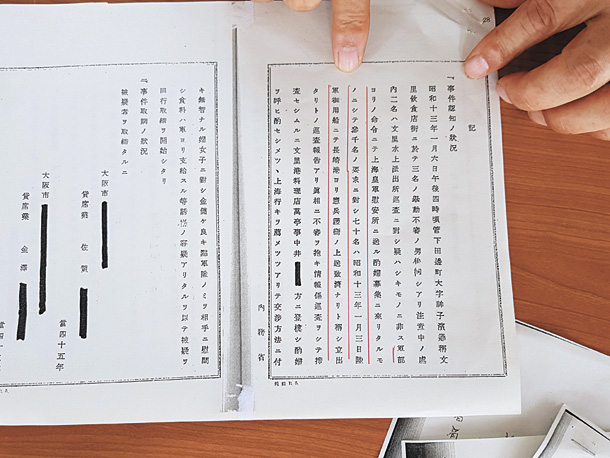 A Japanese police document from Feb. 7, 1938, describes the mobilization of women into wartime sexual slavery as “abduction.” [HWANG SUN-YOON]

Japanese police documents from 1938, which depict Japan’s mobilization of women into wartime sexual slavery as “abduction,” were revealed by a Korean scholar Sunday.

Kim Moon-gil, head of the Korea-Japan Cultural Studies Institute, revealed a document describing a “case of abduction of women,” dated Feb. 7, 1938 from Wakayama Prefecture and sent to Japan’s interior department as well as a response from Nagasaki police.

“These documents show that Japanese police concluded the recruitment process of ‘comfort women’ was ‘criminal,’” Kim said, “and that Japan abducted and mobilized these women not only in their own country but in Korea, and that its military authorities and consulate in Shanghai were also involved.”

Kim, also a professor emeritus at Busan University of Foreign Studies, said the documents are evidence of the Imperial Japanese Army’s forceful mobilization of girls and young women, euphemistically referred to as comfort women, into frontline brothels before and during World War II.

The document says “three men with suspicious behavior were spotted and questioned” by police at a food vendor in Wakayama Prefecture at 4 p.m. on Jan. 6 in Showa 13, or 1938.

According to the document, these men told police, “There is nothing suspicious. We have received orders by military authorities to send 3,000 [women], and so far we have sent 70 on army ships on Jan. 3, Showa 13, from Nagasaki port to Shanghai, under the protection of military police.”

This document further concluded that “the recruitment method was through abduction of unknowing women who were told they would be paid well, fed, clothed and given lodging by the military in exchange for comforting soldiers.”

It goes on to name and identify the three men, whom police describe as “suspects.”

Kim said, “Even in the process of recruiting comfort women in Japan, there were cases of abduction and mobilization, and this document from the Wakayama prefectural police notifies police of other prefectures that suspicious men were abducting women.”

This document was included in the Japanese government’s compilation of records related to the comfort women issue, published in March 24, 1997.

Kim acquired a copy of the document from an acquaintance at a Japanese national university library in April.

He also revealed documents from Jan. 20, 1938, from the Nagasaki prefectural police chief in charge of external affairs that respond to the Wakayama police notice and describe such “mobilization happening in our country [Japan] and Joseon [Korea].”

The Nagasaki police official goes on to say, “They will carry identification issued by the consulate, so be accommodating to such individuals in the boarding process.”

A notice on this issue was conveyed from a superintendent from the Japanese consulate in Shanghai to the Nagasaki police official on Dec. 21, the previous year, according to the document.

Kim has taught and researched Korea-Japan issues for the past three decades at Busan University of Foreign Studies.

The documents were revealed right before the fifth International Memorial Day for Victims of Japanese Military Sexual Slavery on Monday and Liberation Day on Tuesday, which marks the end of Japan’s colonial rule on Aug. 15, 1945. “The Japanese government’s remarks that there is no evidence of the forceful mobilization of women into sexual slavery are simply shameless,” Kim said. “The Japanese government must truthfully accept its past mistake and apologize to the victims.”