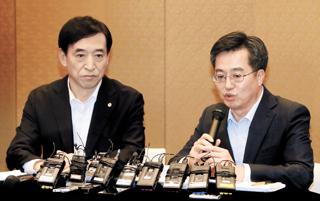 Bank of Korea Gov. Lee Ju-yeol, left, and Finance Minister Kim Dong-yeon hold a meeting at the headquarters of the Korea Federation of Banks on Wednesday. [YONHAP]

Faced with escalating tension from North Korea’s missile threats, the leaders of South Korea’s central bank and the Ministry of Strategy and Finance on Wednesday signaled market stabilizing measures should the strain from geopolitics worsen.

However, Bank of Korea Gov. Lee Ju-yeol and Finance Minister Kim Dong-yeon noted that the latest developments fall short of warranting any measure during a meeting at the headquarters of the Korea Federation of Banks in central Seoul.

“At this stage, it is not appropriate to mention which measures we are going to take,” Lee said.

Kim added that the financial market appears to be stabilizing this week after a swing of fluctuations last week.

The finance minister added that his department and the Bank of Korea would continue to cooperate and monitor the markets.

This is the second time that the two finance chiefs have held a meeting since June. Along with the financial risk posed by North Korea, Kim and Lee touched on other pressing issues like rising household debt and the central bank’s interest rate policy.

The finance minister said measures aimed at curbing household debt, initially scheduled for implementation this month, will be delayed to September at the latest.

Kim also fended off recent news reports that suggested the administration was implicitly championing an interest rate increase, saying the Bank of Korea’s independence was secure.

The reports came after presidential aides voiced support for a higher interest rate during interviews with the media.

“If a presidential aide officially talks about the interest rate decision, it will hurt the independence of the Bank of Korea,” the minister said. “The monetary committee at the central bank should wholly decide on the rate.”

While the two finance chiefs played down the economic impact of North Korea’s missile threats, other analysts have projected worse consequences.

A report from KB Securities said that if the current level of tension continues, the country’s GDP growth will decrease by up to 1.1 percent.

“In the past, the impact that North Korea’s provocation had on the country’s economy ran temporarily in a subdued manner,” said Chang Jae-chul, an economist of KB Securities. “But the current degree of tension had been formed a long time ago and is stronger [than before].”