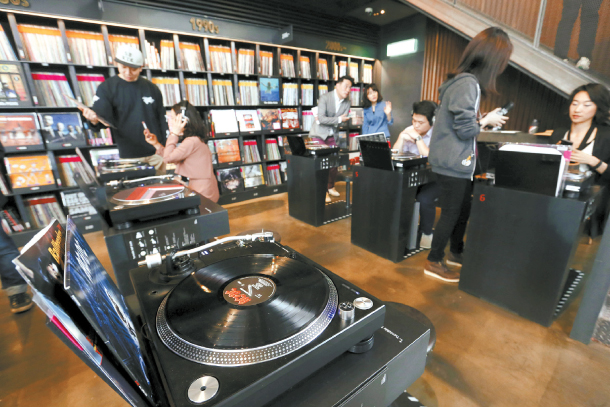 Appreciating music through vinyl records has made a comeback as more and more people look for analog experiences. Businesses to enjoy and purchase vinyl records including Hyundai Card’s Music Library, pictured above, and its Vinyl and Plastic store in central Seoul have sprung up recently. [HYUNDAI CARD]

Finding space in your home for a turntable, speakers and a large collection of vinyl albums was a cumbersome undertaking that quickly fell by the wayside when other music listening technologies came along. Cassette tapes, compact discs, mp3 players and finally mobile streaming services all became dominant thanks to their convenience. However, in recent years, vinyl has slowly made a comeback across the globe.

According to the International Federation of Phonographic Industry (IFPI), the number of vinyl records sold worldwide jumped up from 5 million in 2008 to 32 million in 2015. Korea too, has been witnessing a rapid surge in vinyl sales along with the resurgence of cafes and bars playing music on turntables. Back in the heydays of vinyl records in the 1970s and ‘80s, Korea had a vinyl record-pressing plant in Majang-dong in eastern Seoul, but it closed down 13 years ago.

However, with the resurgence of analog sentiment and increased demand for vinyl records, a brand new record-pressing plant called Machang Music & Pictures opened up in June in Seongsu-dong, eastern Seoul.

Although Korea still lags behind in vinyl record sales compared to other countries, with no official figures tracking the sales yet, the people behind Machang Music & Pictures thought it was important for Korea to have its own pressing plant. 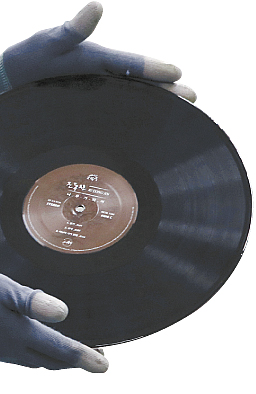 “Many asked me that question,” said Park Jong-myung, marketing director of the company. “We are living in such a digital world where almost everyone consumes music through streaming on their mobile phones. But we started it because we wanted to emphasize the value of listening to music, whereas these days, many people are simply consuming music.”

Park explained that he and other employees at the company share one philosophy about music, which is that “active behavior needs to be used to appreciate music, even if it means having to bear inconveniences.”

“We believe music should be something that should be possessed,” Park added. “As the music industry developed, new technologies have been developed for music listening, but we believe the only medium that can purely express the real sound of music is a vinyl record.”

The new system, according to the company, allows an all-in-one process of vinyl making, from cutting the master plate and plating the discs, to pressing the vinyl and packaging. After the vinyl factory in Majang-dong closed down, the local vinyl-pressing industry had to turn to factories in Japan, England or Germany to manufacture their products and import them back to Korea. According to the company, this process takes about five to six months and creates numerous difficulties such as miscommunication, an increase in production cost and a decrease in quality control. But with the local factory, Machang Music & Pictures said it can cut down the production time to three to four weeks.

The new factory currently manufactures about 1,000 records per day using two of the locally developed machines. It plans to produce new albums of Korean singers in vinyl as well as re-issuing popular vinyl albums of the past.