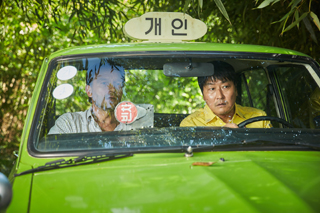 While watching “A Taxi Driver,” I found myself surprised by the car chase scene in the latter part of the movie. I was sobbing as the movie carefully approached the Gwangju Democracy Movement through the eyes of two protagonists, a German journalist and a taxi driver, and suddenly, the movie seemed to become a Hollywood action flick.

It was a dramatic interpretation of the devotion and contribution of the many taxi drivers who helped at the time, but I suspected that it may have been a product of the obsession that big-budget summer movie should include some action.

It takes a certain courage to turn real-life events, especially historically important ones, into a movie. As the blacklist case of the Park Geun-hye administration shows, dealing with certain topics could be a threat to the creators.

Ironically, if successful, these productions can also be hugely influential.

Many of the most successful movies in Korean cinema history are directly and indirectly based on history and real-life events, such as “Roaring Current,” “Ode to My Father,” “Assassination” and “The Attorney.”

Original films like “Veteran,” “The Host” and “Train to Busan” touch on the corruption and injustice of real life.

Historical fiction and films based on true stories highlight events that have been nearly forgotten and remind younger generations of tragedies they did not experience. This summer’s “A Taxi Driver” and “The Battleship Island,” as well as “Silmido” and “Taegukgi,” the first two movies to draw 10 million viewers, are good examples. Previously, 10 million tickets was a number filmmakers could only dream to achieve. But lately, one or two successes are expected each year. In other words, the entire market is dependent on a few box office hits.

Of course, there are successful films that deal with real-life events and figures during the Japanese occupation without the blockbuster elements such as “Dongju: The Portrait of a Poet” and “Park Yeol.” Aside from the approach to the theme, it is noteworthy for the overall Korean film industry. While a handful of huge box office hits continue to be produced, medium successes, which make up the middle ground between blockbusters and small-time films, are rare.

As a result, investment is concentrated on major films, and market diversity is decreasing. While the absence of diversity won’t ruin the film market overnight, its impact would gradually undermine the strength of the market.

The audience already knows. It is meaningful and can be seen in the criticisms that “The Battleship Island” faced over its dominance of screens at local theaters.

*The author is a deputy cultural news editor of the JoongAng Ilbo.