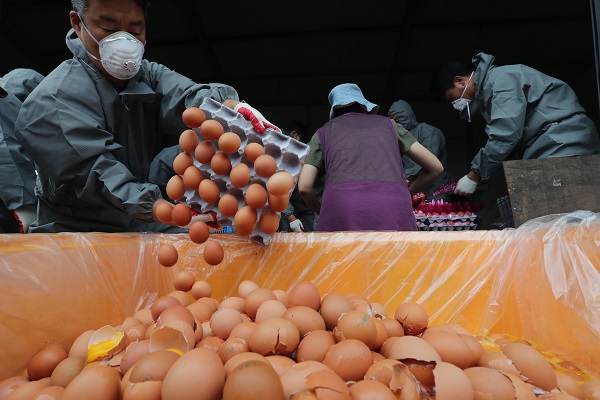 Eggs contaminated with pesticides were found at three more farms Wednesday, and the government promised to destroy all eggs produced at such farms.

Prime Minister Lee Nak-yon said Wednesday that all eggs from contaminated farms will be destroyed by Friday and eggs from safe farms will be distributed. He said the crisis could be solved in couple of days.

“We plan on destroying all eggs, including fresh eggs and processed eggs containing fipronil even if they don’t exceed the safety standard as we believe they shouldn’t be consumed,” said Kim Young-rok, minister of agriculture, food and rural affairs at a press briefing held at the Sejong Government Complex on Wednesday.

“I apologize to the public for the concerns they have over the fipronil-contaminated eggs and promise the government will do its best to settle the issue as early as possible.”

The Ministry of Agriculture revealed Wednesday that some eggs produced at a Cheorwon, Gangwon-based farm, contained excessive amounts of Fipronil, a type of pesticide not sanctioned for use on layer chickens.

This farm raises about 55,000 chickens and the ministry said some of the eggs produced at the farm contained 0.056mg/kg amount of fipronil, which exceeds the Codex International standard of 0.02mg/kg. In Korea, however, there is no official standard set for this pesticide.

Some farms use pesticides to kill mites and ticks on their chickens.
The government also said an egg farm in Yangju, Gyeonggi, was found to have eggs that contain excessive amount of bifenthrin, a pesticide used to control borers and termites. The farm has 23,000 chickens being raised, and some of the eggs were found to contain 0.07mg/kg amount of bifenthrin. The Korean standard is set at 0.01mg/kg.

The ministry announced Wednesday that it also found some eggs at a farm located in Naju, South Jeolla, containing excessive amount of bifenthrin. The eggs contained 0.21mg/kg amount of the pesticides, which is 21 times more than the standard. However, the government didn’t disclose the final inspection results for the farm. There are now five farms found to have eggs containing excessive amount of pesticides, including the two farms announced on Tuesday.

As of Wednesday, the government inspected a total of 243 farms, including 47 farms with more than 200,000 chickens being raised and found 241 of them meeting safety requirements. Farms with more than 200,000 chickens supply more than 50 percent of eggs distributed in Korea. Eggs from the 241 farms that passed government inspections – accounting for 25 percent of all eggs produced – will be able to be sold.

The Agriculture Minister said all 1,239 egg farms operating in the country will be inspected on the order of President Moon Jae-in. He said 1,013 farms will be inspected by the end of business on Wednesday, which is about 80 percent of the total. The ministry predicted about 80 percent of the eggs normally distributed to the market will be back in supply by Thursday.

But there still is the possibility of finding more contaminated eggs. According to the Agriculture Ministry, the risk is particularly great at small and mid-size farms with less than 100,000 layer chickens. “Most of the inspections were on the large farms up until now and we are just starting to inspect 760 small and mid-size farms on Thursday,” Kim said. “We think there is a possibility of finding more farms with eggs containing excessive amount of pesticides.”

Some major retailers who suspended egg sales on Tuesday resumed sales on Wednesday after their products were approved by the government. GS Retail, which operates GS25 and GS Supermarket in the country, Nonghyup Hanaro Mart and e-commerce company TMON started reselling egg products on Wednesday.

Due to the suspended sales, some bakeries and other businesses were affected, as they were after an outbreak of avian influenza virus earlier this year led to the shortages and price hikes.

“We will be able to hold on for a day or two using eggs stocked in advance but we will run into problems if the supply issue lasts for longer period of time,” said an executive of a large bread company that uses 60 tons of eggs, or 1 million eggs, every day. “I really hope the problem is solved as soon as possible.” When bakeries run into s problem, there’s a domino effect on their customers.

Confectionary companies normally use processed or liquid egg products, and their prices have not been affected yet. But their prices rose nearly 4 percent after the outbreak of AI earlier this year. Major confectionary companies like Lotte and Orion announced they have stocks that can be used for about four to five weeks but are worrying that some of their stock may be from farms that violated the regulations on pesticides.