Shin Ramyun now in all Walmarts

Shin Ramyun now in all Walmarts 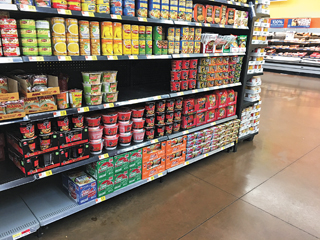 Nongshim’s Shin Ramyun instant noodles have become the first Korean food brand to be available at every Walmart in the United States, the Korean company said Wednesday.

The two had signed a deal in 2013 that allowed Nongshim to sell products directly to Walmart.

Before the contract, Nongshim supplied products through an intermediary, which made it difficult for the company to know precisely where its products were being sold.

The achievement puts Nongshim in the ranks of companies like Coca-Cola, Heinz and Nestle that also have their products on every Walmart shelf in the United States.

“The deal granted direct access to talk with Walmart, allowing our company to implement more sales strategies like adjusting the volume of products on the shelf based on sales figures and conducting promotional events,” a Nongshim spokesman said.

As a result, Shin Ramyun sales at American Walmarts have been growing around 30 percent every year. Previously, Nongshim’s instant noodles were sold at major Walmarts in large cities, but in June, the company made them available at all 4,692 locations in the United States, including smaller rural stores.

Nongshim first exported instant noodles to the United States in 1971 and has been operating a factory there since 2005. It is in charge of producing Nongshim’s instant noodle brands including Shin Ramyun, Neoguri, Chapagetti and Yukgaejang. Last year, the company’s American operation made $180 million in sales.

“We’re making efforts to push revenue by conducting sales and marketing activities at major retailers, not only at Walmart, but also at Costco and Sam’s Club,” said Shin Dong-yeob, executive vice president at Nongshim America. “The initial goal is to catch up Japanese brands.”

Apart from retailers, Nongshim also has a contract with the U.S. government and is also the only supplier of instant noodles to supermarkets in the U.S. Capitol and Pentagon. The Korean food maker began selling its products in U.S. government offices in May last year and currently serves seven government buildings.

“The plan for this year’s second half is to push sales of Shin Ramyun to other government offices like the White House, NASA and UN headquarters,” said Kim Byoung-o, Nongshim America’s senior vice president, who heads its New York office.