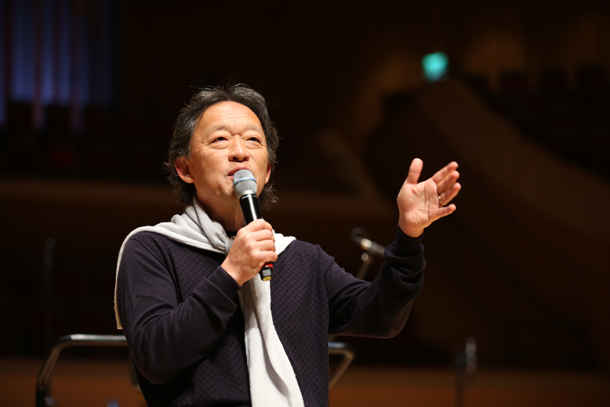 Maestro Chung Myung-whun speaks about the reasons behind establishing two orchestras under one philosophy -uniting the two Koreas through music - at the Lotte Concert Hall on Wednesday. [YOUNG & IPSUM]

Maestro Chung Myung-whun, former artistic director of the Seoul Philharmonic Orchestra (SPO), is making a comeback as a conductor for two local orchestras - the One Korea Orchestra and One Korea Youth Orchestra - but this time, with no strings attached. Since he put down his baton for the SPO, Chung has said that he will not take any more permanent positions, both inside and outside of Korea.

Chung left Korea and his position at the city-run orchestra in December 2015, ending his 10-year relationship with the SPO, after several scandals broke out regarding alleged embezzlement and violations of his position. He was recently cleared of all charges.

One Korea Orchestra is composed of veteran musicians of other orchestras in Korea. It was established by Miracle of Music, a foundation maestro Chung established several years ago. Meanwhile, the One Korea Youth Orchestra has been established as a corporate social responsibility project of the Lotte Cultural Foundation, in an effort to foster young Korean musicians between 19 and 28 and educate them about the important role musicians can play in bringing harmony between South and North Korea.

“When I visited North Korea many years back and had the opportunity to work with two of its orchestras, I was able to confirm that North Korean musicians too want to be united through music,” Chung said.

Although it is less likely that the One Korea Orchestra will become a full time orchestra, Chung said he’ll perform whenever there’s a chance to “spread this philosophy of having hope for unification and the roles musicians can play in achieving that.”

Chung will perform with One Korea Orchestra for the upcoming one-year-anniversary concert of the Lotte Concert Hall on Aug. 18 and 19. The first day of the concert will feature accompaniment by star pianist Cho Seong-jin.