‘North will use ICBMs to get U.S. to dump the South’

‘North will use ICBMs to get U.S. to dump the South’ 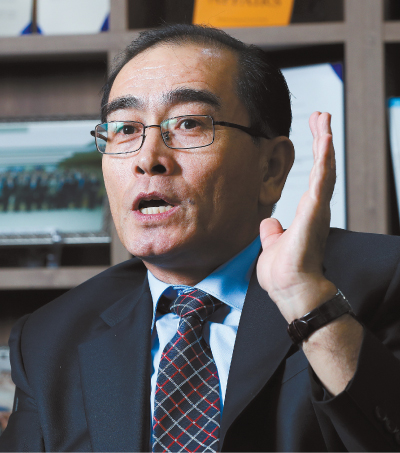 A year has passed since Thae Yong-ho, 55, made international headlines for being the highest-level North Korean diplomat to defect to the South. Thae, who arrived in August 2016 with his entire family after serving as deputy North Korean ambassador in London, now provides valuable insight about his reclusive homeland to South Korea’s Institute for National Security Strategy, a government-backed research center in Seoul.

At a time when North Korea is escalating regional tensions with its Guam threat, the JoongAng Ilbo met with Thae earlier this month at his office to hear his thoughts on the Kim Jong-un leadership and what goal the 33-year-old leader has in mind.

On conflicting views whether Kim is a downright lunatic or a “smart cookie,” as U.S. President Donald Trump once said, Thae put more weight on the latter, saying Kim was only “pretending” to be crazy in order to convince the United States into thinking he could be reckless enough to aim a missile at the world’s strongest power — and eventually get it to question whether the alliance with South Korea was worth going to war against the North.

Q. How are you adjusting to life in South Korea?

A. I expected myself to assimilate to local society quite naturally, but everything messed up last February when Kim Jong-nam [Kim Jong-un’s half brother] was assassinated [in a Malaysian airport]. My security beefed up, preventing me from going around freely. It’s been a year since I settled down in the capital, but I still can’t even tell which sides are north, south, east and west of downtown Seoul.

Have you actually felt threatened after the assassination?

Nope. But I did have more bodyguards after that case, and the costs are covered by tax money. I feel sorry for them, and for using South Korea’s taxes.

But I assume you did get a chance to travel around a bit. What do you remember the most?

I thought it was really impressive to see so many trees on mountains surrounding the highway rest areas. And the rest areas are so clean, even compared to the ones in Britain.

I sometimes get that impression when I talk with South Koreans. And I think to myself, 'How will they face North Korea with a mentality like that?'

It’s hard to believe that Kim Jong-un has tightened his grip over the North Korean regime at such a young age. Is there a hidden power?

It’s difficult to answer with absolute certainty. But it would probably be best to say that the regime is led by a leader from the Kim family and an inner-circle hoping the status-quo to last. Even so, Kim Jong-un always has the final call.

He’s been caricatured by some people as an amateur child or a lunatic — but then others describe him as smart, strategic and leading. Which is more true?

Last year, South Korea held massive candlelight vigils to impeach a sitting president, which led to her actually being ousted from the Blue House and now standing trial. Is anything like that possible in North Korea?

Over the past decades, there were a myriad of anti-Workers’ Party, anti-revolutionary events in North Korea that the South could call something close to a pro-democracy movement. Ordinary citizens are very much against [the leadership]. People can be publicly executed if they get caught watching South Korean movies or dramas, but nevertheless, almost everyone sees them. The chasm between the Kim Jong-un regime and the general public is widening every year, and some day, the two sides will ultimately break like a rubber band. I think that day will come within the next 10 years.

You’ve mentioned Kim Jong-un won’t give up his nuclear arsenals at any cost. Does that mean it’s impossible to pressure him to denuclearize through sanctions or negotiation?

He’s planning to top every missile, including intercontinental ballistic missiles (ICBMs), with a nuclear warhead and place them ready for action by the end of this year. We’ll have to see if he follows through with that goal, but it’s an absolute fact that he’s giving his all to achieve it.

So there’s no turning back for now?

Yes. What the North Korean government, elite groups and top military brass emphasize is that South Koreans are feeble-minded. When something occurs, they rely on the United States rather than trying to solve the problem on their own, is what they claim. So the North will master their ICBM technology and threaten the U.S. by arousing fear. They’ll keep threatening to blow up Los Angeles and Chicago, which will one day lead to Washington asking themselves whether they have to risk fighting with North Korea in order to defend the South. Eventually, the North thinks this could all lead to drawing some sort of a second Acheson line in the Korea Strait between the South and Japan. With North Korea possessing nuclear weapons, and without the consolation of having the U.S. at its back, South Korea will panic and eventually fall apart, they imagine.

What’s the solution to this crisis?

The Kim Jong-un regime has to be peacefully replaced. The regime and North Korea’s nuclear and missile development programs are like two sides of a coin.

A hundred percent yes. For decades, South Korea and the U.S. have tried negotiating with the regime and sanctioning it, but they’ve all failed. The answer lies in the North Korean general public. [The allies] have to awaken them, and encourage them to rise up against the leadership.

But South Korea has been flying leaflets and broadcasting propaganda across the border.