U.S. says North needs to do more for talks to be considered

U.S. says North needs to do more for talks to be considered 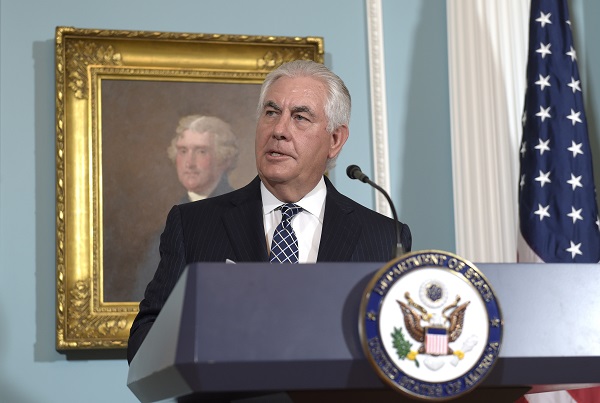 Secretary of State Rex Tillerson responds to a question about North Korea after speaking on the release of the 2016 annual report on International Religious Freedom on Tuesday at the State Department in Washington. [AP/YONHAP]

Pyongyang’s pulling back from its threat to shoot missiles at Guam is not enough for the United States to engage in dialogue, according to the U.S. Department of State on Tuesday.

U.S. Secretary of State Rex Tillerson said to reporters Tuesday, “We continue to be interested in finding a way to get to a dialogue, but that’s up to him,” in reference to North Korean leader Kim Jong-un.

Heather Nauert, a spokeswoman for the U.S. State Department, elaborated in a briefing in Washington Tuesday that Pyongyang’s pulling back from its threat to launch ballistic missiles at waters near Guam was not enough for Washington to engage in dialogue.

"If my child were to say, 'Hey mom, if I don't steal this cookie will you then give me television?'” she offered as an analogy. “No. The answer's no on that one."

Nauert said on the conditions for dialogue with the North, “Well, look, Kim Jong-un, we would like to have talks with him when the time is right, when they show that they are serious…about an effort to move toward denuclearization. We have not seen that yet.”

She referenced North Korea’s two nuclear tests last year and its two intercontinental ballistic missile (ICBM) tests in July.
When asked whether North Korea would have to want to denuclearize before the United States could engage in talks, Nauert went onto say, “They would have to show some serious steps and some serious indications that they would be willing to sit down for talks.”

Washington is increasingly stressing a diplomatic approach to de-escalate of tensions on the Korean Peninsula following Pyongyang backing down from its threats to strike the Guam vicinity with ballistic missiles.

North Korean leader Kim Jong-un was quoted by North Korean state media Tuesday as saying that he will watch Washington’s conduct first before carrying out his threat against Guam.

After U.S. President Donald Trump’s warning to North Korea last week that it would face “fire and fury” like the world has never seen and Pyongyang’s saber-rattling about Guam, there are renewed diplomatic efforts to ease tensions.

South Korean President Moon Jae-in said in a Liberation Day address on Tuesday, “War must never break out again on the Korean Peninsula.” He added that only Seoul “can make the decision for military action” on the peninsula.

When asked to clarify if the United States would have to get permission from South Korea before any sort of strike against the North, Nauert only responded, “South Korea is an ally of ours; and as we do with our allies and friends, we pledge to protect them as well.”

Nauert went onto reiterate that nobody wants war on the Korean Peninsula.
“No one wants that,” she said, responding to a reporter’s question on Washington taking military action. “And that is why we are so, pushing hard on this diplomacy campaign. I mean, the number one thing you hear me talk about here, the number one thing you hear Secretary Tillerson talk about, is goals and efforts to try to denuclearize the Korean Peninsula, getting Kim Jong-un to give up those illegal weapons, getting him to stop with his destabilizing activities.”

Nauert also said Washington has no intention to put a halt to its joint military exercises with Seoul, in lines with a so-called “double freeze” proposed by China and Russia to get North Korea back to the negotiating table to denuclearize.

China and Russia have called for a “double freeze” or “double suspension” approach, whereby North declares a moratorium on its nuclear and missile tests in exchange for South Korea and the United States halting their joint military exercises.

China is also pushing for peace treaty talks with the North to proceed simultaneously with denuclearization negotiations.
“There is no equivalency,” Nauert said between North Korea’s nuclear and missile program and the joint military drills between South Korea and United States, which she called “legal activity.”

Nauert continued, “We will continue to do that, and that’s just not going to change.”
Tillerson and Defense Secretary James Mattis released a joint op-ed in the Wall Street Journal on Monday stressing a “peaceful pressure campaign.” It said Washington does not “seek an excuse to garrison U.S. troops north of the demilitarized zone” or a regime change. The piece said that “diplomacy is our preferred means of changing North Korea’s course of action,” though it is backed by military options and further demonstrated that both U.S. State and Defense departments were on the same page on the issue.

Nauert said on the joint op-ed piece that the two secretaries “believe firmly that diplomacy can solve this; however, we’re prepared, as we are in every situation around the globe, to switch to another plan if that is absolutely necessary.”

Chinese Foreign Minister Wang Yi spoke over phone with his Russian counterpart Sergey Lavrov on Tuesday, and stressed that there is no alternative “to a political and diplomatic settlement” according to the two countries’ ministries.

Wang said that it is urgent for Washington and Pyongyang to “put brakes” on inflammatory rhetoric and cool tensions amid a so-called “August crisis,” according to Xinhua News Agency.

Sullivan likewise conveyed that Secretary Tillerson’s call for a “peaceful resolution” to the North Korea nuclear issue through “applying diplomatic and economic pressure” is the U.S. administration’s clear position and that Washington will coordinate closely with its ally South Korea on this, according to the Ministry of Foreign Affairs here.
BY SARAH KIM [kim.sarah@joongang.co.kr]