Schools order all eggs off menus

Schools order all eggs off menus 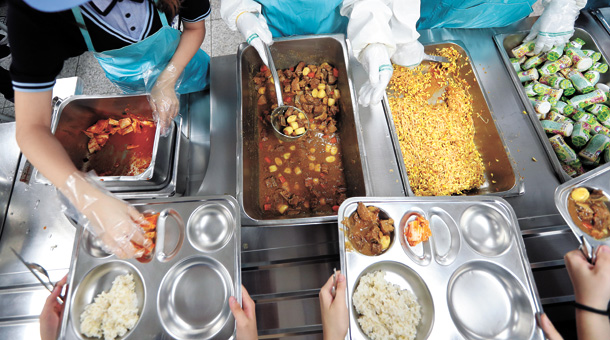 A school cafeteria in Seoul supplies lunch without eggs to students on Wednesday. The Seoul Metropolitan Office of Education ordered every elementary, middle and high school in the capital not to serve anything with eggs in it, whether contaminated or not, until the central government announces its probe results. [YONHAP]

Local education offices told schools on Wednesday to drop any items containing eggs from their lunch menus, as the contaminated egg scare continues.

The Seoul Metropolitan Office of Education even ordered every elementary, middle and high school in the capital not to serve anything with eggs in it, regardless of whether they were contaminated or not, until the central government announces its probe results.

Seoul schools were also ordered to individually check whether their supplies were from any of the contaminated farms detected by authorities so far.

Most schools in Seoul began their fall semester Wednesday, including 94 percent of all middle schools and 93 percent of the entire high school body. Only one of the 603 elementary schools opened that day, while the rest were scheduled to follow by next week.

The education offices of Busan, Gwangju and South Jeolla also ordered their schools to ditch any menu items including eggs, while North Jeolla urged schools not to use the ingredient, but did not directly impose a ban. South Gyeongsang ordered cafeterias not to serve any foods whose main ingredients was eggs.

The Ministry of Education announced that its regular cafeteria checkup will focus on whether venues are contaminated with any pesticides, a massive overhaul that will be carried out jointly with the Ministry of Food and Drug Safety, the Ministry of Agriculture, Food and Rural Affairs, and each regional government office.

The last-minute order to change lunch menus has rattled cafeterias, where food supplies are normally purchased a week in advance.

A girls’ high school in Incheon went ahead with its tonkatsu (pork cutlet) menu Wednesday after being told by their egg supplier that his produce was safe.

“We called the farmer asking not to send the eggs, but he protested, saying his were clean,” a school official said. “We had no other choice but to trust him because the menu had all been planned out beforehand.”

A spokesman from the Seoul Metropolitan Office of Education said 70 percent of Seoul elementary, middle and high schools used safe eggs from an eco-friendly distribution center, but that time was needed to figure out whether other schools were at risk.