Choi Hyoung-woo, the cleanup hitter for the Kia Tigers, could be a strong MVP candidate at season’s end, though the individual honor is the furthest thing from his mind. 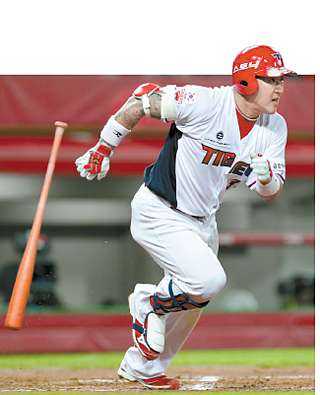 Choi Hyoung-woo of the Kia Tigers watches his hit against the NC Dinos at Gwangju-Kia Champions Field on Monday. [YONHAP]

Choi knocked in three runs for the Tigers on Wednesday against the NC Dinos, helping the club to a 4-3 victory at Gwangju-Kia Champions Field in Gwangju.

The Tigers are leading the Korea Baseball Organization (KBO) at 69-37-1 (wins-losses-ties), eight games ahead of the Doosan Bears with 37 games to play.

And leading the KBO’s highest-scoring offense is Choi, a big-ticket free agent signing last offseason. After nine full seasons with the Samsung Lions, the 33-year-old switched uniforms, but the one thing that hasn’t changed is his performance at the plate.

Those three RBIs Wednesday gave Choi 102 for the season, making him the third KBO player ever to drive in 100 or more runs in four consecutive seasons.

These big numbers, plus the fact that the Tigers are in the driver’s seat for the pennant, make Choi an MVP favorite. But he insisted he has no desire for any individual glory, as long as he can add another championship to his resume.

“I only want to keep playing baseball with this group of guys and keep winning championships,” said Choi, who won four straight Korean Series titles with the Lions from 2011 to 2014. “I don’t want anything else.”

Choi finished second in last year’s MVP voting to Doosan Bears’ starter Dustin Nippert. Choi said after losing out on the award last year, he decided not to put too much stock into individual trophies.

“I used to want to win awards, but I am now happier to play second string,” said Choi, the 2008 Rookie of the Year. “I am not disappointed at all [about not winning the MVP last year].”

And he’s climbing up that ranking on walks, as he’s first in that category this year with 77, 13 more than anyone else. And quite literally, no one has seen more pitches outside the strike zone than Choi this KBO season.

Pitchers have thrown him 1,066 strikes and 834 balls. He is the KBO leader in both the number of balls and the rate of balls in relation to the total pitches he has faced, at 43.9 percent.

The league average is 36.5 percent.

In other words, Choi is not seeing a lot of pitches to hit, but when he does, he pounces on those opportunities. No one has done more with less at the plate.

“To be honest, I am finding it difficult to maintain my feel at the plate,” Choi said. “I am seeing so many balls, but it comes with the territory of batting cleanup. I’ve figured out ways to deal with it. If I don’t overcome this, I won’t get recognized as a good hitter.”

Choi has been so productive because, ironically, he is not thinking about driving in runners all the time.

“I decided I should just focus on advancing the runners because there are a lot of good hitters on this club,” Choi said. “With Samsung, I went up to the plate thinking I had to get the job done all by myself. Here, I just think about moving the runners.”