Korean football fans have never been kind to players from the Chinese Super League. 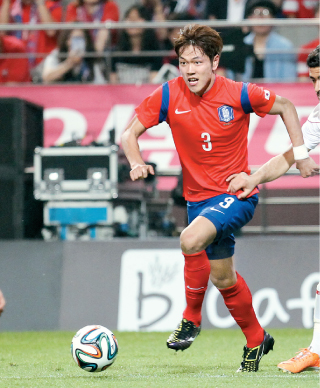 When the national team’s previous coach, Uli Stielike, put Korean players from the Chinese league in charge of defense, they underperformed, putting out losses against China and Qatar, considered the two weakest teams in their 2018 World Cup qualifier group.

The current coach, Shin Tae-yong, has opted to maintain the defensive line, despite criticism from fans and pundits that the team’s defense is currently its greatest weakness. Korea is ranked second in Group A, but it’s tied with Qatar for most number of goals allowed during qualification matches, at 10. Fans have lost trust in the Chinese league players’ ability to hold down the field.

But instead of scouting other leagues for defenders, Shin has expanded the number of players from the Chinese Super League, following in the footsteps of his predecessor Stielike. Four are holdovers from Stielike’s roster, and one is new to the lineup. Among the five, three are expected to play the role of center back. 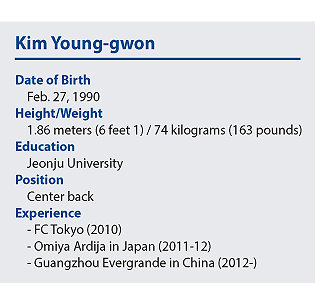 Shin’s decision has drawn up a firestorm, but the coach is sticking to his guns and placing faith in the players. “The Chinese clubs signed them for high contracts because they’ve shown great ability,” Shin said. “Right now, they are in great condition. With a little work, Korea’s defense has the potential to be really good.”

The coach is going to have to prove it by winning the team’s two remaining World Cup qualifiers against Iran on Aug. 31 and Uzbekistan on Sept. 5.

Among the defenders from the Chinese Super League, Kim Young-gwon of Guangzhou Evergrande Taobao FC is the one to watch. He has the most experience on the national team, playing in 45 A matches and scoring two goals. His past experience includes big tournaments like the 2014 World Cup in Brazil and 2015 Asian Cup in Australia. Among the defenders, he has received the least criticism from fans.

Shin has kept a close eye on Kim since he was appointed the national team coach in July. The first foreign club that he watched was Kim’s Guangzhou Evergrande, considered the best in the Chinese Super League, where Kim has proven his worth as a reliable starting player.

In Team Korea’s current contest for a World Cup berth, Kim’s only national team performance has been their match against Syria in September 2016 that ended in a zero-goal tie.

When the team played against China and Qatar earlier this year, Kim was out due to a fractured shin. He has since recovered, and Shin has placed his confidence in Kim to perform.