The language of a leader

The language of a leader 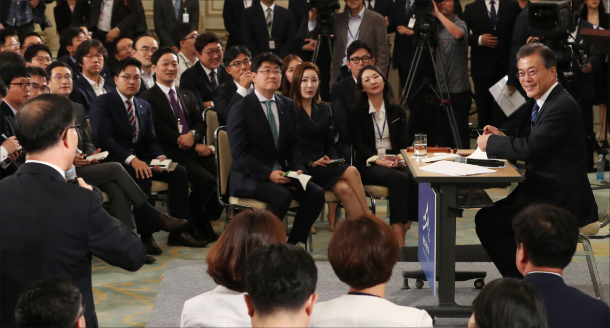 Churchill’s speech stirs the imagination. U.S. President John F. Kennedy was fascinated by his language, and when he conferred honorary citizenship on Churchill in 1963, he said, “In the dark days and darker nights when England stood alone — and most men save Englishmen despaired of England’s life — he mobilized the English language and sent it into battle.”

Churchill’s language was the wild card and weapon that turned the tide. The United Kingdom’s pessimistic atmosphere disappeared, patriotism and fighting spirit were revived, and the military was ready to battle. The language of the leader was contagious.

The Korean Peninsula has entered a critical situation. North Korea’s missiles are stirring the world. South Korean President Moon Jae-in has opted to highlight the “decision-making power of the Republic of Korea.” In his Liberation Day speech, he said, “Only the Republic of Korea can decide on military action on the Korean Peninsula. No one can decide military action without the consent of South Korea.”

The outcry represents the tragic hope of Korea’s history. During the Russo-Japanese War and Sino-Japanese War at the dawn of the 20th century, the battleground was Korean territory. The two wars broke out in the West Sea, while Korea was a helpless observer. The great powers did not seek the consent of a small and weak country. Korean presidents have tried hard not to forget that lesson.

Agonizing over national security, President Roh Moo-hyun sought to prevent history from repeating itself. He pursued inter-Korean reconciliation and armament at the same time. He promoted construction of a naval base on Jeju Island to have a self-reliant arms system. The Jeju base watches the movements of Chinese and Japanese fleets as well as North Korean vessels moving in the East and West Seas. Peace cannot be defended with peace. That has been the lesson of world history. Roh used his own language to convey that lesson and advocated peace through self-reliant armament.

Roh had a clear view. “Peace in Switzerland cannot be protected without security,” he said in June 2007. “Armament is an essential element of a nation. Peace cannot be maintained without power.” Switzerland is a neutral state but still maintains a solid defense. The Swiss do not beg for peace or plea to neighbors because there is no mercy in defending the territory.

Moon’s focus on Liberation Day was “sovereignty.” He said South Korea must initiate resolutions to the Korean Peninsula’s problems. He seemed to be responding to Henry Kissinger, who wrote in the Aug. 12 edition of the Wall Street Journal that “no country is more organically involved than South Korea.” The wording in the article is a bit scornful. The absence of security ownership only wins contempt. Moon’s speech was filled with determination to lead the situation but did not mention specific plans. He emphasized solid peace bolstered by defense strength without presenting specific means to deter a missile attack from North Korea.

The exchange of verbal threats between the United States and North Korea has stopped, but the essence of the situation remains the same. Fear over North Korea’s missiles are growing. We can begin to overcome a crisis by knowing the enemy and self. Churchill’s optimism came from knowing himself and his enemy. He thoroughly read Hitler’s “Mein Kampf” when most British politicians at the time were not taking the book seriously.

Our society needs to know what nuclear weapons mean to us. An intercontinental ballistic missile is just ring one in a concentric circle. South Korea’s conventional weapons are feeble before such a missile. The one with the ICBM is powerful and alternates between threats and mercy.

The actual goal of North Korea’s provocations is withdrawal of the American military from South Korea. An ICBM poses urgent questions to our society. How should we respond to nuclear weapons? How can we bargain between the United States and China? Should we bring back strategic nuclear weapons from the United States or seek nuclear armament to protect ourselves? Will North Korea give up its nuclear program through talks, and is regime change possible? Knowing the self and the enemy can help devise a strategy to fight.

Moon should speak on the truth of intercontinental ballistic missiles and bring together the nation and wisdom. He should be the highest PR expert for the nation. We need the decisive language of Churchill. Sharing the truth is the condition to deciding our own fate.