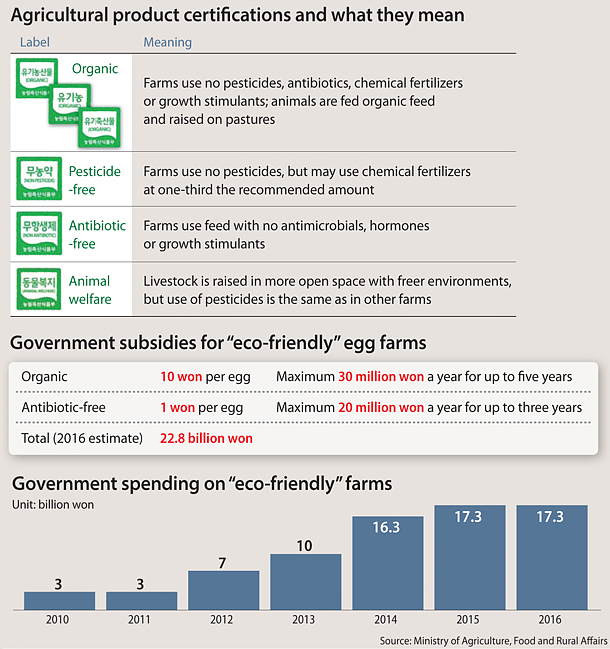 After the discovery of pesticides in some Korean-produced eggs earlier this week, consumers are now questioning the accuracy of labels that certify products as “eco-friendly.”

Almost 90 percent of the farms found to have used dangerous pesticides as of Thursday sold their eggs with such labels. The eggs contained levels exceeding the standard in Europe, where eggs have been found to contain the same pesticides used to kill insects that live on chicken skin. Korea has no pesticide limits of its own.

Many consumers here assume that eggs with eco-friendly labels come from farms that don’t use any kind of chemical agents including antibiotics, growth stimulants and pesticides, so they are willing to pay up to double the price of ordinary eggs for them.

But after this week’s reports of pesticide use on so-called eco-friendly farms, consumers of these products, many of them parents of young children, have taken to the internet to express their frustration. Several posts asked why they paid so much to buy eggs labeled as environmentally friendly when they were equally as harmful as other eggs.

“People are rapidly sharing information because consumers no longer trust government claims about safety,” an official from the Consumers Union of Korea said.

Among the 32 farms with contaminated eggs, 28 sold them with eco-friendly labels, according to the Ministry of Agriculture, Food and Rural Affairs. The pesticides include fipronil, which can cause headaches and internal organ damage if consumed.

The government said 765 egg farms have environmentally-friendly labels. They represent nearly half of the country’s egg farms. Only 15 have the most rigorous label of organic, which means they don’t use any chemicals on their farms and feed their animals with organic feed.

Most “eco-friendly” farms have the antibiotic-free label, which only indicates that the farm uses no antimicrobials, hormones or growth stimulants in their feed. It does not indicate whether pesticides were used on the livestock or even the farm in general.

In recent years, farms have been trying to qualify for the labels as consumers become more health conscious and “eco-friendly” produce comes with a premium. The government, too, provides subsidies for the labels, offering 1 won (0.09 cents) per egg to farms that have the antibiotic-free label and 10 won for those with organic labels.

The government last year spent 2.2 billion won on subsidies for eco-friendly egg farms. Overall spending amounted to 17.2 billion won. But what’s been more worrisome to consumers is the reckless way in which the government seems to be granting the labels.

The Ministry of Agriculture, Food and Rural Affairs and the National Agricultural Products Quality Management Service are responsible for inspecting farms that request eco-friendly certification, but because of their limited manpower, the inspections are contracted to private companies that specialize in the service. A law revised this past January allows the government to outsource the job, and the companies - there are currently 39 - only make inspections twice a year.

However, the contracted companies have an incentive to grant more certificates because their business depends on the continued existence of eco-friendly farms, and since the government only mandates inspections occur two times a year, it’s easy for farms to cheat.

Yang Chang-sook, an official in the Ministry of Food and Drug Safety’s food safety policy bureau, also noted that pesticide inspections were pushed down on the priority list because antibiotic use on livestock and eggs had historically been a bigger problem.

The pesticide scare is now not only limited to eggs but also poultry, as restaurants serving chicken have seen a sharp drop in customers.

“After watching the news in the morning, it dawned on me that if the pesticides were sprayed on livestock, people might avoid chicken as well,” said Chang Sam-rye, a 66-year-old owner of a samgyetang (chicken soup) restaurant in southern Seoul. “But [that fear] has become true.”

The government has tried to rein in chicken phobia by arguing that poultry farms wouldn’t have used pesticides on fowl raised for human consumption because they are killed after 30 to 45 days, not enough time for insects to manifest on their skin.

According to the Ministry of Food and Drug Safety, the government in June conducted an inspection of more than 12,000 chickens for 20 toxic agents including the pesticide fipronil, and found none.