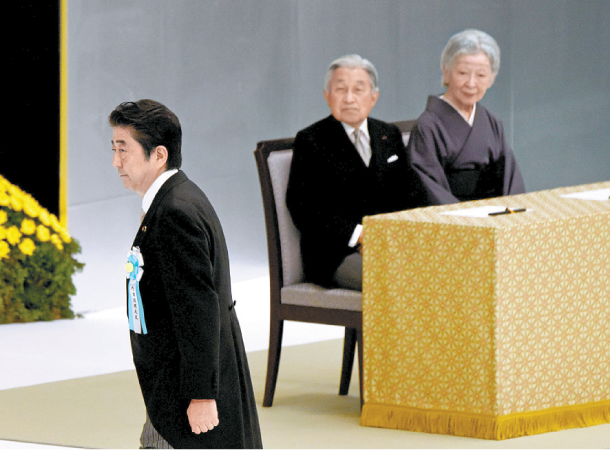 There was no repentance this year — again. On Aug. 15, the anniversary of the end of World War II, Japanese Prime Minister Shinzo Abe showed attended a memorial ceremony for the war dead at Budokan Hall and said, “The tragedy of war should never been repeated.”

He continued, “After the war, Japan has consistently taken steps as a country that abhors war and treasures peace, and has made efforts to promote peace and prosperity in the world.” But he did not mention any responsibility or remorse for the war. He did not say the words repeated by his predecessors, admitting that Japan caused its neighbors great damage and pain because of the war.

He also did not make a pledge not to wage war again, a pledge linked to the basic ideology of Japan’s pacifist constitution. In fact, Abe has never made that pledge in the five previous ceremonies he has attended since his inauguration in 2012.

The one person who was highlighted on the day, both domestically and internationally, was 84-year-old Akihito. The Japanese emperor is likely to abdicate as early as the end of next year, and he sought forgiveness from the victims, expressing his “deep remorse.” He was 12 years old at the time of Japan’s surrender.

The Japanese emperor said, “Reflecting on our past and bearing in mind the feelings of deep remorse, I earnestly hope that the ravages of war will never be repeated.” He continued, “I now pay my heartfelt tribute to all those who lost their lives in the war, both on the battlefields and elsewhere, and pray for world peace and for the continuing development of our country.”

Abe likes to talk about the future.

But the future is not created out of thin air. The future is in an extension of the past and the present. When the one who is responsible for a war that has resulted in unforgettable pain speaks of the future in terms of peace and prosperity without repenting for the crimes of the past, then the sincerity of such statements becomes questionable. Compare, for instance, the way in which German leaders have shown remorse and made apologies to the world whenever possible.

For Korea-Japan relations to develop, the two countries should share an understanding of the past and present. If Japan continues to neglect the matter, to ignore the echoes of its colonial rule and demand Korea move on, then establishing a healthy relationship cannot be expected.