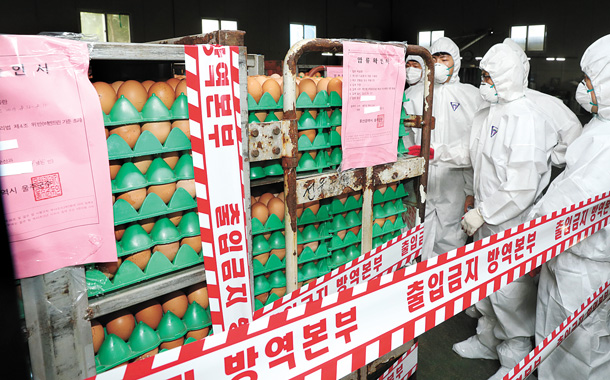 Officials confiscate eggs at a farm in Ulsan that were determined to be unfit for sale. The eggs had levels of the pesticide bifenthrin that exceeded the government safety standard. [YONHAP]

The number of farms producing eggs with excessive levels of pesticides rose to 32 Thursday, 26 more than the previous day.

The farms were located all around the country except for the southern island of Jeju.

The government said some of the eggs had levels of fipronil exceeding the Codex International standard of 0.02mg/kg and of bifenthrin exceeding the country’s standard set at 0.01mg/kg.

Farmers use such pesticides to kill mites and ticks on their chickens and especially in summers.

The Ministry of Agriculture, Food and Rural Affairs finished inspections of 86 percent of 1,239 chicken farms operating in the country as of Thursday morning.

The ministry said it will inspect the remaining farms by the end of Thursday.

Minister of Agriculture Kim Young-rok made apologies once again Thursday at a briefing at the National Assembly.

“I apologize for causing concerns and inconvenience to the public,” Kim said. “The government has worked on building a safe and healthy agriculture distribution system but it appears that some improvements are needed.” Kim promised he will try to stabilize the market for eggs as well.

“We found 32 farms that failed inspections as of Thursday but believe 87 percent of eggs produced in the country can be distributed,” he said. “All of the eggs that passed inspection will be distributed starting tomorrow.”

On the previous day, Kim said the government planned on destroying all eggs, including fresh eggs and processed eggs, containing troublesome pesticides even if they don’t exceed the safety standard.

The Agriculture Ministry said eggs from the 28 farms can’t be sold but 35 farms can still sell their eggs if they remove the environmentally-friendly marking from the eggs.

Ministry of Food and Drug Safety also announced Thursday that it finished inspecting 113 out of 162 retailers across the country and that it found only 2 of them were selling eggs with excessive levels of pesticides. The government plan on destroying all eggs that are contaminated and finish inspecting 49 retailers as early as possible.

Meanwhile, the Korea Institute of Animal Products Quality Evaluation provides information on eggs on its website (http://www.ekape.or.kr/view/micro/eggetrace/eggetraceSearch.asp). People can type in the barcodes shown on eggs to find where they came from and the name of farmers.

The institute was one of the top ten searches in Korea Thursday.