Dongbu gadgets do well in Japan

Dongbu gadgets do well in Japan 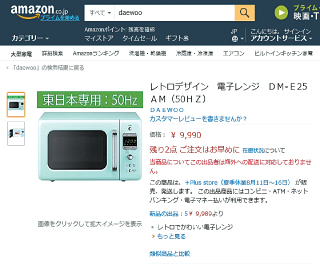 The company said on Thursday it began selling all of its products at such major e-commerce sites as Amazon Japan, Rakuten and Yodobashi Camera. Having launched operations in Japan in 1995, Dongbu Daewoo has only concentrated on offline sales thus far.

“With the online retail market growing nearly 10 percent each year in the past few years in Japan, we have decided to enter e-commerce to attract younger customers in their 20s and 30s who are more accustomed to online shopping and narrow the communication gap with customers,” said a Dongbu Daewoo spokesman. Amazon Japan is the No. 1 shopping website in Japan that saw revenue surpass 1 trillion yen ($9.08 billion) last year. Rakuten is the No. 2 player and marks its 20th anniversary this year.

Some of the products Dongbu Daewoo believes have a competitive edge in Japan include The Classic branded small refrigerators that come in a retro design and target single households, 4.2 kilogram (2.2 pound) top-loading mini washing machines that can be mounted on the wall and miniature microwaves.

Japan is a notoriously difficult market for white goods producers from both Korea and other countries, due to the sturdy standing of local producers such as Sony and Panasonic. Samsung Electronics has withdrawn its business except for smartphones and LG Electronics has been looking to ramp up premium TV sales there.

Dongbu Daewoo still maintains a sustainable sales record in Japan concentrating on fridges, washing machines and microwaves. Last year, its multi-purpose fridge and combi fridge won a prize from the annual Good Design Award, one of the top four design awards in the world. In June, the manufacturer released a 3 kilogram front-loading washing machine that is one fourth the size of ordinary machines. It mainly caters to households with babies that need to wash clothes frequently, enabling eight different courses including washing baby clothes and diapers at 60 degrees Celsius (140 degrees Fahrenheit).

“The small gadget market is growing at a rapid pace in Japan, where single households and nuclear families are on the rise,” said the Dongbu Daewoo spokesman.

The company has been pursuing niche markets in other parts of the world as well. Its refrigerators were top sellers in Mexico with a 37.5 percent market share and it captured a 64.6 percent share in the mini washing machine market in China last year.